If ‘meat juice’ be the food of love, the appetite may sicken, and so die 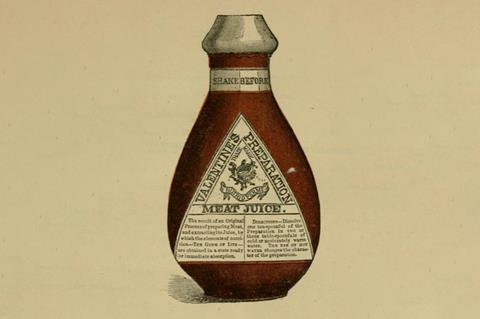 The meaty matter at the centre of a juicy case

Nearly 2000 years after the Roman poet Virgil penned amor vincit omnia (‘love conquers all things’), Valentine’s Meat Juice was advertised to victual and invigorate any infirm patient.1 Meat juice does not sound remotely romantic, but the rumoured origin of Valentine’s Meat Juice has the elements of a gothic love story. Mann Valentine cooked up his beef product with the aim of providing a nutritional supplement for his extremely ill wife, who is said to have had stomach cancer. Valentine claimed his mission was a success, with his wife’s health supposedly improved.

Created in the early 1870s, Valentine’s Meat Juice was more patent medicine than medical aid. Patent medicines, those ‘proprietary concoctions with extreme promises and flamboyant showmanship’, were most popular during the 19th and early 20th century, and were often not worth the containers they were packaged in. Sometimes, they could be downright dangerous. That was the problem with Valentine’s Meat Juice – at least according to the journal Food and Sanitation. They named it a suspect in the death of James Maybrick. A unique claim for a journal to make – especially considering Florence Maybrick, James’ wife, was convicted of his murder.

The Maybrick murder was a cause célèbre in the late 1880s.2 It had all the necessary ingredients to hold the public’s attention on both sides of the Atlantic: British older husband, American much younger wife; an unhappy marriage, with infidelity by both husband and wife (though only the latter seemed to matter in the Victorian age). Struck ill, James Maybrick suffered a decline that spelled gastritis – or the tell-tale signs of arsenic poisoning. After his death, arsenic was found in his body and in his bottle of Valentine’s Meat Juice. Mrs Maybrick admitting to soaking flypapers to extract their arsenic. To a jury, this all added up to murder. Mrs Maybrick was sentenced to hang, but walked out of prison after 15 years.

Was Valentine’s Meat Juice a would-be mask for the murder weapon of arsenic? This question was much debated in court and in print, including across the pages of Food and Sanitation. The journal laid out its concerns over three different articles published nearly back-to-back about four years after Mrs Maybrick’s conviction.3–5 The authors, like other case critics before and since, were less than convinced by the arsenic evidence put forward at trial. Indeed, the journal heavily implies that social mores and salacious details, rather than science, sealed Mrs Maybrick’s fate. The amount of arsenic found in Mr Maybrick and his Valentine’s Meat Juice was described as ‘not sufficient to poison a child’. Of important note was that Mr Maybrick was a well-known ‘arsenic eater’.

As much As possible

Arsenic products played a pivotal – and poisonous – role in patent medicine history. While her husband seems to have been a keen user of arsenic products, Mrs Maybrick seemingly confined it to her beauty regime – another common practice of the time. Production of a face wash is why Mrs Maybrick says she extracted arsenic from those earlier mentioned flypapers. A variety of items found in the Maybrick household contained arsenic – and other poisons – thus potentially rendering none of it particularly suspicious or malicious. The amounts of arsenic detected in Mr Maybrick’s remains and items might just be business-as-usual.

Beyond Mr Maybrick’s arsenic eating, Food and Sanitation offer a new source of arsenic – tainted glycerine (glycerol). A bottle of this was found in the Maybrick home, which may have come from an adulterated batch of glycerine identified by a local wholesale chemical company.

For all their talk of arsenic, the authors of the articles in Food and Sanitation think it’s possible that Valentine’s Meat Juice acted alone, rather than as a vehicle for the poison – by lacking nutritional value. Along with similar products of the day, Valentine’s Meat Juice was valued as nutriment in large part because it was thought to be packed with albuminoid proteins and their hydrolysis products. Just how protein-packed were these concoctions?

Not anywhere near enough to take the place of foods, according to analysis and commentary published in Food and Sanitation. The journal presented the problem starkly – ‘instead of feeding their patients with beef tea, they were starving them’. Mr Maybrick’s death was ‘more likely the result of want of proper nutriment than of the small amount of poison discovered at the post-mortem – in fact the symptoms disclosed would be much more likely to follow a severe attack of gastritis, succeeded by a practical deprivation of food’.

It might seem odd for a journal to take up the Maybrick case, but Food and Sanitation didn’t see itself as a champion of criminal justice. Indeed, the authors stated ‘[u]pon the question of Mrs Maybrick’s guilt or innocence we have an absolutely open mind’. Of greater importance to the journal were two things – dubious claims by patent medicines and the adulteration of products like the aforementioned glycerine. Food and Sanitation wanted tighter controls and more testing – something it pointed out would also benefit cases such as the Maybrick mystery. And it is a mystery still debated. Much like love itself.

1 M Valentine, A Brief History of the Production of Valentine’s Meat Juice: Together with Testimonials of the Medical Profession [Brochure]. Richmond: Valentine, 1873

2 K Colquhoun, Did She Kill Him? A Torrid True Story of Adultery, Arsenic, and Murder in Victorian England, New York: The Overlook Press, 2014