The nuclear danger of iodine

It may not be an element you think of as problematic. But, as Mark Foreman explains, iodine causes very complicated problems in nuclear accidents

It has been four years since the nuclear power plant accident in Fukushima, Japan. There remains a huge amount of remedial work to be done, but in that time the scientific community has deepened its collective understanding of the chemistry of nuclear disasters, not least in relation to iodine.

It may be a familiar element most associated with benign activities, such as wound treatment and water purification, but certain isotopes of iodine are harmful. The radioactive iodine from bomb testing and the Chernobyl accident has been shown to increase the rate of thyroid cancer among the general public.

In both the Fukushima and the 1986 Chernobyl accidents, volatile iodine species were released into the environment with tellurium. Of all the fission products, iodine poses a special threat to public health because it has a high fission yield, it can spread as volatile species and in mammals it accumulates readily in the thyroid, a small but vital organ. While the vast majority of iodine radioactivity is short-lived, it can have life-changing effects. A thyroid cancer patient who has lost their thyroid function as a result of surgery or 131I treatment, will require hormone replacement medication for life.

The problem of radioactive iodine is complicated by the variety of different species it can form. Each has different transport properties in the environment. For example, most of the airborne 131I from Chernobyl that reached Japan was in the form of organic iodine compounds.1 Furthermore, some iodine-containing compounds will pass through some accident mitigation systems. A water-filled scrubber will capture iodine oxide aerosols or other iodine-containing solids. Meanwhile, the sodium thiosulfate in the large scrubbers used in Swedish nuclear power plants will capture elemental iodine. However, although alkyl iodides will react with sodium thiosulfate to form Bunte salts, the reaction can be slow, allowing some proportion to escape. It is also important to note that, depending on the species, it is possible for some older sampling methods to underestimate the amount of radioactive iodine released in an accident. 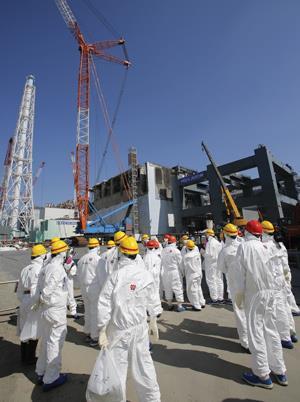 Once in the environment, the potential for human exposure increases with dangerous consequences. Research with 132I has shown that humans retain a large fraction of the iodine in inhaled methyl and ethyl iodide. But iodine can take part in lots of reactions before it even leaves the reactor. During normal operation, the temperature gradients in nuclear fuel pellets cause the iodine and caesium to migrate into the gap between the fuel and the cladding.2 The fission process forms 133Xe, which, with a half-life of 5.2 days, has plenty of time to diffuse into the cooler parts of the fuel. There, the xenon decays to form caesium, which reacts with iodine to form caesium iodide. If the fuel is overheated and damaged, caesium iodide aerosols can be delivered into the containment space.

The caesium iodide can be converted by redox reactions into iodine, even without available oxygen gas: as an accident starts, the irradiation of water generates oxidants such as hydroxyl radicals and hydrogen peroxide.

Interactions within the reactor

One way to limit the reactions of iodine is with careful selection of organic materials, such as paints, solvents, oils and plastics, within the reactor containment building. These will be subjected to intense radiation, resulting in reactive species, such as alkyl radicals. Dichloromethane, for example, can react with solvated electrons to form chloride ions and chloromethyl radicals, with those radicals going on to react with iodine to form alkyl iodides.

Researchers investigating dichloromethane, 1,1,1-trichloroethane, trichloroethylene, di-alkyl ketones and aromatics have suggested that aromatic solvents are most suitable because of their small tendency to form alkyl iodides.3

But other risks to human health must also be considered. We have characterised a series of paint samples, both ‘ancient’ and modern, used in nuclear plants.4 We reason that the poor safety and environmental profiles of aromatic solvents make them unviable. Additionally, having compared a modern, oxygenated solvent with white spirits, a much older solvent, we found that, although methyl and ethyl iodides were formed from white spirits, the modern solvent was also able to form isopropyl iodide.5

Alkyl iodides can be consumed by SN1 and SN2 reactions in which water, organic matter or thiosulfate provides the nucleophiles. Alternatively, radiation can cause organic iodides to decompose. Nordic researchers have been working on the formation of aerosols from methyl iodide and ozone, a radiolysis product of air. They have found that both short wavelength UV light and gamma rays were able to decompose methyl iodide and cause the formation of aerosol particles.6 As you can see, iodine may seem like a simple element, but there is nothing simple about the iodine chemistry of a nuclear accident.