The perils of trying to organise dinner at a science conference

The most common exchange at any conference is as follows:

‘Great. I’m starving by the way; I ate one bagel eight hours ago.’

The main chemistry conferences in the world, the American Chemical Society annual meetings and European Chemical Society congress, are galactic in scale. They spill across multiple conference centres and into adjacent four-star hotels. Tens of thousands of scientists strut along endless corridors, trying to look important. First-time attendees can only clutch their lanyards and stare from the side lines in wonder. With the scramble of attending back-to-back parallel sessions crammed into those few precious days – and the adrenaline jitters that comes from job-hunting, networking or meeting your idols – daytime eating becomes a low priority. 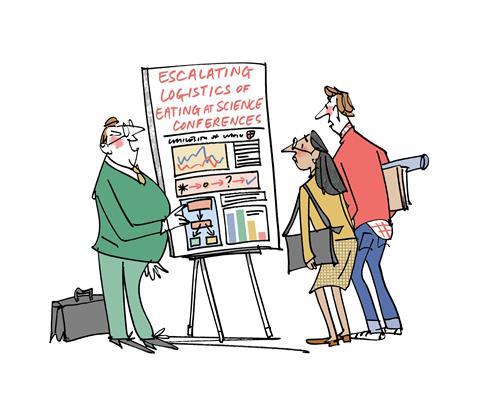 That’s why, when a friend says ‘Hey, a group of us are going out for dinner tonight, want to come along?’ you immediately agree. You are an introverted scientist who has just been handed a structured social event. These impromptu, joyous evening gatherings are what professional conferences are all about! Better still, you’ll get to eat something more refined than greasy noodles sold in that nearby supermarket (which doesn’t feel particularly near, especially when you are in business attire and venturing away from the silky air-con into a baking, unfamiliar city).

The plan as presented to you: 15 chemists will meet at 8pm after the poster session then head straight to the restaurant. Almost immediately this mutates. At 8.20pm several folk remain engrossed in discourse beside their posters. Realising this won’t be a surgical operation, people start slinking away in search of sustenance. Others enjoy the drama of remaining non-committal until the last minute then promptly declining. Now you have to collar your extroverted poster-presenting chums to determine who has permanently abandoned the group and who is merely in the toilets.

Around the time you finally have everyone moving in the appropriate direction, somebody admits they first need to stop off at their hotel room. ‘Oh yeah,’ other people chorus, ‘we also need to go back to our hotel rooms.’ The hotels in question are located in the opposite direction from the restaurant. Of course.

While these individuals saunter back to their rooms, those waiting in the lobby try to track down their flaky friend who begged to be included in tonight’s meal plan but has since vanished into the ether. According to expert witnesses, they are either asleep, drunk or some state in between. They aren’t answering their phone. It’s been 12 hours since you lined your stomach with that solitary bagel, and you’re too frustrated with your flaky buddies to bond with them.

Finally, you make it to the restaurant. It’s at an hour closer to breakfast-time than dinner. The waiting staff apologise because another louche group refuses to vacate your reserved table. You are directed to hang around for an indeterminate wait at the bar. By now, you lament your decision not to opt for the greasy noodles.

Once you get seated and fed – you aren’t really hungry now but feel obliged to play along – you may assume your ordeal is over. Not so. One attendee has run out of local currency and insists on paying with a card. Another insists on paying with cash – but has only $20 to go towards a $23 per person meal (tip not yet included). Naturally, this restaurant doesn’t pre-split bills. The group mathematician is trying to work out the division, but the amount owed per person is fluctuating with each calculation. You are so tired you start throwing extra $10 notes on the table in a bid to accelerate proceedings. Eventually the magic total is hit, the staff give you their cheeriest fake smile and everyone can stagger back to their room.

By the time you crash asleep it is past midnight. There’s an 8am talk tomorrow you plan to attend, which means the feeding cycle will repeat itself. Another day, another bagel…