The smell of success 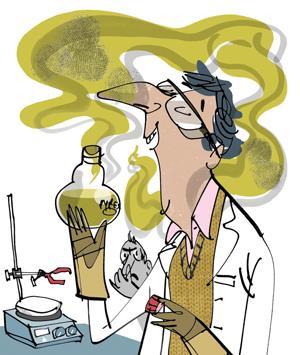 Very little can get a group of bench chemists talking like the topic of the most memorable smells they’ve ever experienced. Anyone who’s worked in the field will have found their olfactory horizons expanding, although not always into welcome territory.

Writing about these things is always a challenge – some compound classes can be related to everyday experience, but some just can’t. Thiols and sulfides can be evoked instantly by references to skunks, burning rubber and so on. Amines can be compared to ammonia cleaning solutions and to the sort of fish that makes you want to call up the market and give them a piece of your mind. Esters, meanwhile, can be summed up as ‘fruity’ (although this ranges from ‘pleasantly fruity’ to ‘weirdly insistent and off-puttingly fruity’). But could you describe what pyridine smells like? ‘Disgusting’, while an unassailable opinion, does not count as a true description. I’ve never heard it put into words. Pyridine smells like nothing else in the world except pyridine, and I think we can all be grateful for that.

The sheer variety of smells that we chemists are exposed to is surely one driver of our passion for the subject. But the olfactory centres of the brain are hooked up to other regions in ways that are hard to quantify. Memory is inextricably intertwined with smell and taste, as French novelist Marcel Proust famously described. Laboratory scents can recall the past as quickly as any other – I’ve come across some that reminded me of undergraduate labs (or even of my childhood chemistry set) and they worked as well as any cup of tea with a madeleine dipped into it. I fear to imagine what Proust might have generated if Remembrance of things past had been triggered by a stray whiff of pyridine, but I suppose we can be grateful for having avoided that, too.

Figuring out just how our noses (and our brains) respond to such a variety of smells, though, is a difficult task. Olfactory receptors come in huge variety, and there are notable heterogeneities among people in their sensitivity and perception of some scents. However, I’ve never heard of anyone who couldn’t detect alkyl phosphites or isocyanides, and if anyone finds them appealing, I hope we never meet. These receptor proteins clearly respond to molecular shapes (consider benzene versus toluene). But they can clearly also detect local differences in electron density and polarity (consider benzene versus pyridine). Confusingly, we can smell the differences between some enantiomeric pairs, but not others.

Concentration can also have a profound effect, as perfumers well know. In recent years, perfume expert Luca Turin has advocated another theory, that nasal receptors are directly sensing vibrational modes. This idea, controversial in many quarters, is being put to the test, although designing and executing good experiments in this area is nowhere near as trivial as it might seem. A complete theory of smell will clearly not be a simple one; the simple explanations can all be demolished with clear counterexamples.

Oh, and my most memorable smell? I’ve certainly experienced some eye-openers over the years, and have probably bleached my nose hairs more than once. But the one that comes to mind was when I had done a Swern oxidation (a dimethylsulfoxide-based reaction that generates dimethyl sulfide), and worked up the reaction by doing a Peterson olefination directly on the crude material (a transformation that depends on a trimethylsilyl reagent).

Dimethyl sulfide is unmistakable, and there are many people who can’t stand it. But one labmate of mine didn’t actually mind it so much in the context of the Swern, because he considered it ‘the smell of success’ – he knew the reaction had worked as soon as he opened the flask. Organosilanes, for their part, have a strange, penetrating, vaguely metallic smell that’s also instantly recognisable. But when these two came together, they produced something that seemed to have come from a robot with gastrointestinal issues. I was not prepared for this synergistic symphony of scent, and nearly dropped the flask. I’ve never encountered anything like it since, but if I do, I promise not to become all nostalgic. There is a limit, after all.