Copper key to our sensitivity to rotten eggs' foul smell

The receptor that lets us smell unpleasant sulfurous molecules at miniscule concentrations has been unmasked by a team of chemists and neurobiologists. And what’s more our ability to smell these nasty rotten egg odours depends on the presence of metals in the mucus in our noses – something that is unique among known odour receptors. 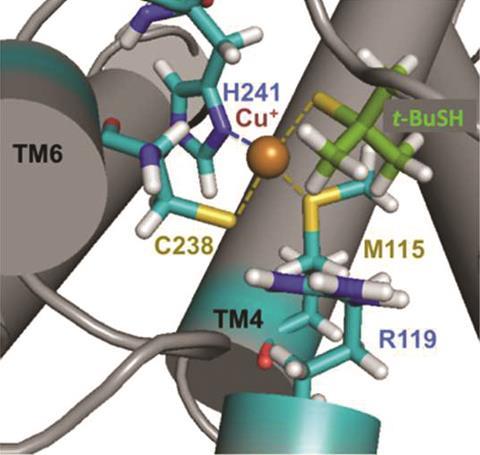 Two active sites with copper can coordinate to thiols

We are extraordinarily sensitive to the smell of thiols, something chemists have known for a long time. As early as 1887 Emil Fischer was surprised at how ‘our perception is one hundred millions time more delicate’ to ethanethiol than it is to ethanol, a molecule with a very similar shape. Humans are so sensitive to thiols that they are used as an olfactory alert: 2-methyl-2-propanethiol is added to natural gas so we can detect even very small leaks.

In 1977, Robert Crabtree first hypothesised that ‘thiols bind chemically to a nasal receptor containing a transition metal like copper at the active site’. Now, researchers identified a receptor called OR2T11 that is activated in the presence of both copper and silver. Using molecular dynamics simulations, the team found two binding sites which contained copper. The importance of both sites in detecting thiols was confirmed by site-directed mutagenesis: genetically engineered receptors lacking the amino acids responsible for copper binding lost all functionality.

The multidisciplinary team also discovered that this particular receptor is only sensitive to small thiols up to five carbons long, which suggests an unusually small receptor cavity. This agrees with previous data that indicated lower odour thresholds for highly substituted thiols, which would fit better than straight-chain molecules. Researchers also proved that the receptor has no affinity with structurally similar alcohols. Copper’s role in the detection of thiols rests with its ability to selectively bind to sulfur over oxygen, which explains the differences between ethanol and ethanethiol that Fischer observed.

‘Thiol sensitivity is key to the survival of mammals, as it usually signals the presence of rancid food, oxygen-depleted atmospheres and predators,’ says Eric Block, one of the co-authors of the study and professor of chemistry at the University of Albany in the US. However, ‘there may be other thiol-responsive receptors that do not require copper. We cannot generalise from our limited study to other receptors that haven’t been examined.’ Block also highlights the importance of this research and the huge variety of applications it could have: ‘We can imagine artificial devices that would detect specific odorants just as our receptors can, with applications in forensics (locating cadavers), medicine (breath analyses), or even food science and personal care.’

‘Nasal mucus was known to contain divalent metal ions, but their role in olfaction was under discussion,’ says Ricardo López, a flavour chemist at the University of Zaragoza, Spain. ‘However, this publication proves for the first time the central role of copper in the remarkable sensitivity we have toward thiols.’

Block’s team also found that silver nanoparticles can substitute for copper in this type of receptor. There has been concern over the use of silver nanoparticles, which are now found in more than 300 different consumer goods, as they often end up in the environment – textiles that include silver nanoparticles to fight body odour have been shown to loose most of them in the first wash. This could have ‘disastrous consequences for the environment’, says Block. ‘Fish, for instance, constantly use olfaction to navigate, and with most nanoparticles ending up in water streams, they could seriously impact the ecosystems, and even the fishing industry.’ However, he notes that little is known about the impact of silver and other metals in olfaction and ecology, and is an area that needs further exploration.