Alan Turing, perhaps not often remembered as a chemist, provided the starting point for computational chemistry 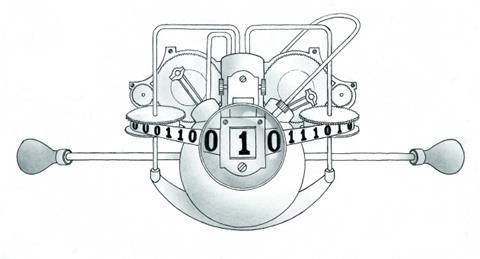 Questions are the beating heart of science and the source of its unending flow of discoveries. The most successful scientists are the ones who never lose that childlike ability to transform their wonder about things they don’t understand into experiments, the scientific interrogation of the world. Alan Turing, perhaps not often remembered as a chemist, stands out for providing the starting point for computational chemistry and for presenting a chemical hypothesis for the spontaneous appearance of structure (see p46).

Born to a family sufficiently rich to have moved into tax exile in France, his parents nevertheless wanted him to have the best British education. They chose Sherborne school in Dorset and, at age 14, Alan set out by ferry to Southampton. Because of a national strike, he cycled the 100km to the school. His achievement won him the admiration of his peers, but their enthusiasm waned when it became clear that he was a quiet and introverted boy of no particular academic or sporting distinction. A ferocious and deep reader, however, Turing stored away plenty of ideas for the future. He developed wide scientific interests, and by the time of his A-levels it was clear that his mathematical skills were impressive. For a school science prize, he developed a mathematical treatment of the kinetics of chemical clock reactions – an achievement that astonished his teachers.

He obtained a first class degree in mathematics at the University of Cambridge and stayed on with a fellowship. It was a time of great excitement in mathematics. At the end of the 19th century, German mathematician David Hilbert had asked whether it was possible to make mathematics internally self-consistent, by proving every statement. He also wondered whether there might be a recipe, a formula, for deciding whether any proposition was true. Kurt Gödel’s demonstration that mathematics was based on unprovable axioms torpedoed Hilbert’s hopes but left open the question of whether a mechanical method might not be found to test for mathematical truth.

It was this that hooked Turing. While running along the river Cam, he began to imagine a machine that would take instructions and decide, without external human intervention, the validity of a mathematical assertion. To do this, Turing’s machine had to deal symbolically with instructions, and have a memory that would allow it to carry out more complex logical operations. As he developed his idea, he began to realise that such a machine might be able to conduct almost any task put to it. His paper ‘On computable numbers’ established the principle of a logical, programmable machine, well before anything more than a mechanical adding machine existed.

With the outbreak of war, Turing was seconded to Bletchley Park where his role in cracking the German military Enigma codes has become the stuff of legend. He brought an analytical approach to codebreaking, but was also involved in designing and constructing some of the first digital computers. 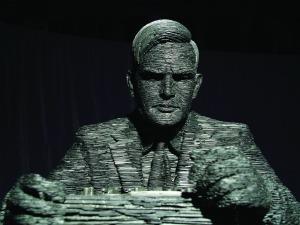 Once demobilised at the end of the war, Turing joined the National Physical Laboratory, one of three locations in the UK where computers were being developed. His intensity of thought, limited social graces and inability to compromise led to him being somewhat sidelined from the project. He moved to the University of Manchester, where a more powerful machine was being built. Once again he failed to get his ideas implemented – they were too abstract and ahead of their time. But that left him with time to think. By now his ideas about machines had matured. He started considering the parallels between computers and the mind, and wondering what it would take to make a machine truly intelligent. And how might one tell? He imagined asking questions of a computer and a human via a keyboard. Failure to distinguish them would constitute a test of true computer intelligence.

But while speculating on intelligence, Turing was also puzzling about biological pattern formation – an issue that he had toyed with since childhood. In 1952, he demonstrated quite counterintuitively that it must be possible to produce spatial patterns by exploiting the two processes in chemistry that lead one towards equilibrium – reaction kinetics and molecular diffusion. He sketched some of the patterns in his notebooks. Others he explored by sneaking brief spurts of computer time between other jobs. Unbeknown to him, in Russia, Boris Belouzov had just stumbled on oscillating reactions, the very systems that would demonstrate Turing’s ideas in practice.

But from Turing there would be nothing more. A chemistry question hovers over his lonely death in 1954: was his ingestion or inhalation of cyanide, while electroplating at home one bank holiday, deliberate or accidental? We will never know. And if the jury is still out on Turing’s morphogenesis ideas, his machines are everywhere, crunching data and models for us night and day. With the energy demand for computation in a chemistry department now matching that for experiment, perhaps there is a different question we should ask. Is it possible to test, from behind a screen, whether a scientific result is the result of experiment or computation?