‘On cold, dismal Saturday afternoons, I may curl up with a fat volume of Thorpe’s Dictionary of applied chemistry… opening it anywhere and reading at random.’ I doubt if many chemists would take their passion so far, but Oliver Sacks did. And I’m sure I am not alone in returning to the chemical recollections in his paean to chemistry, Uncle Tungsten, following his death at the end of August. 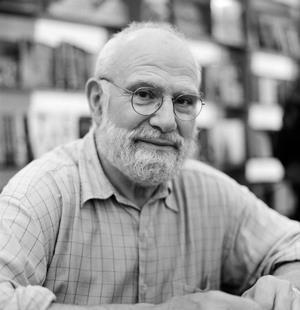 Chemistry was Sacks’ boyhood hobby, and infused (and enthused) his life right up to the end. He carried a pocket spectroscope to split the city lights of Times Square into its constituent atomic emissions. He dreamed of the Manhattan street grid transformed into the blocks of the periodic table, and of going to the opera with the heavy transition elements tantalum, rhenium, osmium and so forth. ‘Radishes, for me, evoke the smell of selenium.’

I find particular pleasure in Oliver’s admission to feeling ‘a sudden desire for a ball of cadmium’, because he pressed that same ball (lightly varnished against its mild toxicity) into my hand when I first met him in New York over a decade ago. There in his kitchen, with almost the entire periodic table laid out, urging me to listen for the ‘cry’ of tin as it is bent and undergoes a structural transition, he was obviously and literally in his element(s).

His friends Roald Hoffmann and Bassam Shakhashiri have called Uncle Tungsten one of the two great chemical classics of all time, the other of course being Primo Levi’sThe periodic table. ‘For the joy of color changes, stinks, and bangs, for conveying the feeling of mercury sloshing around in a sealed crock or tin weeping,’ they write, ‘nothing out there holds a candle (not even Faraday’s candle) to Uncle Tungsten.’1 They are right, of course, and what unites both books is that they go beyond a celebration of the science itself and make chemistry, like listening to Bach or looking at a Paul Klee painting, one of the joys of being alive.

But there is more reason why the pairing of Sacks and Levi seems apt. Both were of Jewish heritage and were profoundly affected by the second world war – Levi of course the most deeply and shockingly in his time spent in Auschwitz, but Oliver’s wartime stay at a sadistic boarding school left scars that perhaps never really healed. In his autobiography On the move, published to great acclaim earlier this year, he implies that his ‘imprisonment’ there gave him the longing for ‘movement and power’ that fueled his love of motorbikes, swimming (which, mercifully unlike bikes, he kept up throughout his life) and, I suspect, the general restlessness that led him to experiment with drugs, to ride with Californian Hell’s Angels, and to seek out new experiences everywhere.

Most importantly, the writings of both Levi and Sacks are distinguished by their humanity, indeed their humanism: both writers seek to locate human experience at the centre of our understanding of the world, and they suggest that, whatever challenges we face, it is the positive, creative, inquisitive aspects of ourselves that most deserve our attention. Oliver’s real-life ‘Uncle Tungsten’, he said, ‘saw all science as wholly a human, no less than an intellectual and technological, enterprise, and it seemed natural to me, in my turn, to do the same’. The periodic table was voted the best science book ever in a poll by the Royal Institution in 2006; Oliver’s A leg to stand on, about the psychological effects of a severe injury to that limb incurred in a climbing accident (again that thirst for danger), did not make the shortlist, but tellingly it was nominated by Rowan Williams, then Archbishop of Canterbury, whose own humanism both draws on and transcends his religious affiliation.

I thought of Oliver when the mysteries of sodium’s explosive reaction with water were recently unveiled. ‘I decided to look at its action outdoors,’ he wrote in Uncle Tungsten. ‘I obtained a good-sized lump of it – about three pounds – and made an excursion to the Highgate Ponds in Hampstead Heath with my two closest friends, Eric [Korn] and Jonathan [Miller]… It took fire instantly and sped around and around on the surface like a demented meteor, with a huge sheet of yellow flame above it. We all exulted – this was chemistry with a vengeance!”

That sums up Uncle Tungsten: chemistry with a vengeance. But also chemistry with a soul. Sacks never felt – and this, I suspect, was crucial to the book’s success – that he was on a campaign to win anyone over to chemistry. He sees no need to defend it against any presumed chemophobia, but just lets it speak for itself. ‘At 11, I could say “I am sodium” (element 11), and now at 79, I am gold,’ he wrote three years ago. It is a huge loss that he never went beyond lead – but the alchemy of his writing turned all to gold.