How do you nurture innovation and original research? Hiring smart people is an obvious start, as is providing them with good kit. But you also need to provide an environment where questioning, risk-taking and rule-breaking are encouraged, and where people of different outlooks and experience can meet and talk. The invention of the diamond anvil cell is a case in point. 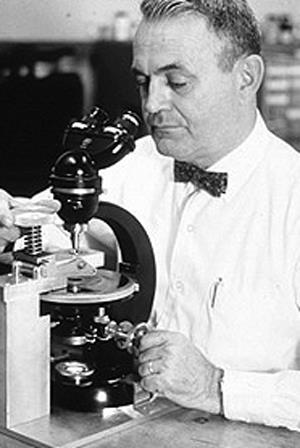 Alvin Van Valkenburg was born in Schenectady in upstate New York, US, where his father worked for General Electric. He studied at Union College, where he developed an interest in geochemistry. On graduation in 1936 he studied at the Colorado School of Mines. During the war, he worked in Boston on ‘degaussing’ ships to protect them from German mines, a technique invented by the Canadian·British chemist Charles Goodeve. He also spent time at Harvard University with the brilliantly absent-minded petrologist Esper Larsen, and the  reclusively brilliant physicist Percy Bridgman, who was developing methods to investigate materials under previously unimaginable pressures. Bridgman’s methods involved squeezing materials between ‘anvils’ of tungsten carbide, driven by huge hydraulic presses. The experiments revealed a rich new world of chemistry and physics.

By the time he was hired by the National Bureau of Standards (NBS) in 1945 ‘Van’ had caught the high-pressure bug. He grew silicates like mica under hydrothermal conditions, and used Bridgman presses to explore mineral behaviour. Extreme science was burgeoning. Not only had Bridgman been awarded the physics Nobel prize in 1946, but a group at General Electric had succeeded in cracking the ‘ultimate’ problem: artificial synthesis of diamond. But for Van and his peers, tungsten carbide was reaching its limit.

In 1950, Andrew Lawson in Chicago decided to try the hardest material of all to contain the pressure. He squeezed samples between a pair of steel pistons inside a hole drilled into a 3.5 carat diamond. X-ray diffraction showed the appearance of new phases of calcite and other minerals.

In 1958, a better idea struck both in Chicago and at the NBS in Washington almost simultaneously: to use diamonds themselves as the anvils. Lawson and graduate student John Jamieson demonstrated this ‘relatively inexpensive’ device by reporting a new phase of bismuth, which they characterised by passing x-rays through the sample parallel to the faces of the diamond.

In Washington, Van began to collaborate with Charles Weir, a physical chemist and superb craftsman who had switched from leather chemistry to high pressure science. They also shared the lab with infrared spectroscopists Elmer Bunting and E R Lippincott. Tossing ideas back and forth, they decided to try recording infrared spectra using diamonds as optical windows.

Van acquired a huge, 7.5 carat diamond from the Smithsonian Museum, drilled a hole as Lawson had done, inserted pistons, and squeezed. The diamond disintegrated. The disastrous failure led them independently to use opposed diamonds, driven by a Bridgman-inspired lever arm controlled by a hand screw to control the pressure. The design allowed light to pass axially through the diamonds. Using a lathe, a drill and a hacksaw, Weir knocked up a prototype of the diamond anvil cell, the size of a paperback book.

To record spectra, the team needed rare Type II diamonds that are infrared transparent. Van, who had good government contacts, secured a supply from the huge stocks confiscated by US Customs from ‘smugglers’ whose identities have never been satisfactorily revealed. Whatever the diamonds’ origins, they made possible a new era in high pressure science.

But nervous about the alignment of the diamonds, Van looked through the cell with a polarising microscope. To his joy and astonishment, he saw coloured bands and fringes that signalled the different pressures across the sample · he was the first person to directly see pressure-induced changes. For the rest of his career he would delight in watching crystals and phase boundaries dancing in the cell. 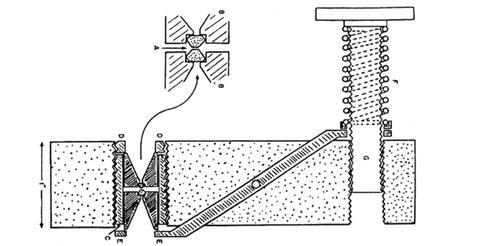 The National Institute of Standards and Technology

However, the pressure was uneven and the samples tended to flow sideways like toothpaste. Tinkering in his home laboratory, Van surrounded the sample with a thin gasket of maraging steel, adding a drop of 4:1 methanol·ethanol to achieve uniform pressures that today extend to millions of atmospheres. The tedium of actually measuring the pressure was removed in 1972 when a casual discussion with colleagues in the staff canteen led Van’s young co-worker Gasper Piermarini to measure the fluorescence of synthetic rubies. He found that the spectral lines shifted linearly with pressure, providing an internal gauge – Van’s ‘DAC’ had truly come of age.

This simple hand-held device, whose windows are open to myriad spectroscopies, has transformed our understanding of the deepest interiors and histories of the planets of our solar system, including our own.

Today, companies like Apple and Google go to huge lengths to encourage conversations between their employees, hoping they will have new ideas to explore and develop. Perhaps it’s time to get away from the slavery of our computer screens and the ‘targets’ set by administrators, and have a good natter.

Acknowledgment
I am grateful to Paul McMillan for inspiration, advice and extensive corrections.