Seeing how other chemists do their work can be an eye-opening experience, in more ways than one 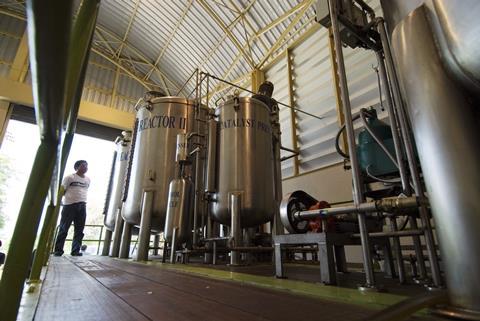 If you’ve never been to a chemical plant, your first time can seem like a trip to another planet. I remember the very first time that I visited one as a graduate student. It was a pretty well-heeled facility, with a two-storey room built around what must have been an 8000 or 12,000 litre reactor. We walked into the room, and looked through the sight glass at the top of the reactor to see the agitator. It was a brief glimpse, and the odd crow’s-foot shape of the retreat curve agitator against the white reactor background didn’t look anything like the familiar blue stir bar in a glass 100ml round bottom flask.

It wasn’t until my third job in the chemical industry that I was privileged enough to get to know a plant that I could call my own. Being able to get up from my desk or walk out from my laboratory and go and see the reactor that would belch forth mysterious and unexpected samples that an operator would bring me – or better yet, product – was an incredible education. Going out to the plant during day and night allowed me to understand its strange rhythms, sweet smells of solvent and its otherworldly noises to the point where I could practically navigate it blindfolded.

A few years later, a new role gave me the opportunity to see a few more plants. I didn’t expect how different it would feel, but it was a fascinating and unexpected reflection of places that I had seen before. When I visited the Kodak plant in Rochester, New York, that manufactures film chemicals, I was practically in awe. I can walk to our facility with my own legs – that’s not practical at Kodak, where it’s best to take a bus. We get our solvents in drums, they recycle their solvents in a facility the size of a small city block and pipe them back to the plant.

I liked the very small reactor bays in the Kodak plant, where you could imagine an operator running reactions at 3000 litre scale like it was a small hood in an academic laboratory. In a small space, there was a computer to record additions to the reactor, the reactor itself and a raised centrifuge to collect product, including a clever spot for a cart to collect product dropped from the centrifuge. It seemed incredibly well-designed and it invited a visitor to think ‘these people are smart and good engineers – I bet they’re good chemists as well.’

Sometimes, you don’t find what you hope to find. Chemical plants in developing countries have a reputation for a lack of safety, and I think it’s best to see for oneself. During a visit to a facility in Asia, our hosts led us to a warehouse of purported pyridine drums. Readers of this column might know that drums of pyridine have a sharp, pungent odour. The drum labels were in a foreign language, so I wasn’t able to read them. Instead, I put my nose close to them and (unwisely) breathed deeply – and didn’t smell anything. While it’s possible that those drums were particularly well-sealed, I think it’s likely that they were not pyridine and simply staged for our benefit.

I was further dismayed to discover their analytical laboratory couldn’t show me the results of the product we were visiting to purchase. When we visited the second level of the reactor suite, I heard a series of muffled thumps. Looking down, I saw that the operators had pulled out a centrifuge bag (used to collect a solid product from a reaction slurry) and were using a wooden stick to break up the chunks of the product in the bag without any masks or eye protection. I’d seen enough.

I was pretty disheartened by that plant visit, because the goal of the trip was to find a trustworthy partner to purchase starting materials from. Our next plant tour in that country was a beautiful contrast. We asked to bring our phones to take pictures – they declined, because they were not explosion-proof (true!). The facility was tidy, and the workers were all well-protected with PPE. When I asked for analytical evidence of their product, they produced a chromatogram within minutes and their explanation made complete chemical sense. The item that I found most heartening was a tiny detail – we walked by a truck being loaded with chemical waste, and there was a chock behind the wheels to prevent it rolling away. It was a very small item, but the care that it showed for safety and the environment was heartening, and even an ocean away, made me feel at home.