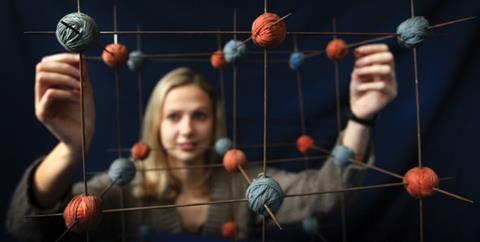 It’s almost impossible to imagine doing chemistry today without pictures – without some concept, however schematic, of what molecules look like. But before John Dalton began to draw atoms as little balls gathered into molecular unions, chemists had to draw on different kinds of intuition.

The Scottish chemist Alexander Crum Brown deserves credit for the canonical picture of ball-and-stick molecules. His images of alkanes, alcohols and other simple organics from the 1860s are not so different from those that still feature in elementary textbooks. Much has been written about the pedagogical and cognitive role of models like these in framing chemical concepts. But rather less well known is Crum Brown’s three-dimensional model of the atomic structure of common salt that he built in 1883 – a prescient intuition of the cubic crystal structure that wasn’t verified until the Braggs did it with x-ray diffraction in 1914.

It wasn’t the first attempt to render molecular-scale chemistry in three dimensions. But no one else seems to have thought of doing that with balls of red and blue wool pierced by knitting needles.

Smart thinking, you might imagine, given that these are easy materials to acquire and assemble. But that wasn’t really the reason Crum Brown chose them. No, he already had the elements (so to speak) to hand – because he was an enthusiastic knitter.

The image of this rather timid, genial white-bearded professor of chemistry clicking away with knitting needles in his office at Edinburgh is rather lovely, as well as pleasingly challenging to anyone apt to relegate knitting to gender-stereotyped domesticity. Some of Crum Brown’s creations sit in the Whipple Museum of the History of Science in Cambridge – they look like purses and leg-warmers rendered in tricolour harlequin patterns, but are actually models of topologically intricate mathematical surfaces: explorations of his lesser-known scientific interests that prefigure the complex intertwined networks and knots today.

Science historian David Dunning at Princeton University argues that these weren’t idle recreations, but a significant aid to his thinking.1 Crum Brown must have known about his brother-in-law Peter Guthrie Tait’s theory that atoms might be knotted tubes or vortices of ether, so his knitted topologies were perhaps not entirely disconnected from his modelling of atoms and molecules.

Knitting’s knack for complex topology has been pointed out by Cornell mathematician Daina Taimina, who has used crochet to make non-Euclidean hyperbolic surfaces.2 This in turn provided the impetus for the Crochet Coral Reef project launched at the Los Angeles-based Institute for Figuring by its co-founder Margaret Wertheim.3 Many corals have convoluted shapes that resemble hyperbolic planes, and Wertheim’s project has goals simultaneously ecological, aesthetic, mathematical and social, while addressing gender-based prejudices about issues of materiality, craft and making.

If you’re still inclined to see knitting and needlework through that stereotypical prism – all Women’s Institutes and tea cosies – you’d better wake up. Knitting is radical. Just look up guerilla knitting, or yarn bombing: textile-based graffiti of a sort that deserves to give street art a good name. Its potential to register gently subversive protest has inspired two artists in the West Country, under the name Particulart, to knit molecules implicated in air pollution and climate change: you can download the patterns and make your own cuddly molecules, should you wish. The blog chemknits.com collects together a diverse range of chemically related knitting patterns, from DNA toys to the ‘heterocyclic hat’ and periodic table sweater. You need never again struggle to find a Christmas present for the chemically inclined.

Having always been more of a needlework man myself, I’m pleased to see that quilting and applique get a look-in too. Veteran populariser of the periodic table Theodore Gray plans to sell quilts of the table made with an automated quilting machine. Meanwhile, the National Academy of Sciences in Washington, DC, is staging an exhibition until October called Radical Elements, which includes 40 quilts ‘each inspired by a different element from the periodic table’, some incorporating unusual fabrics such as aluminium foil and dining utensils. Artist Susie Freeman has a more challenging agenda with her fabrics and dresses made from encapsulated pharmaceutical pills, dramatically displaying the daily intake of drugs needed by sufferers of chronic metabolic diseases.

As new high-tech materials ranging from thermochromics to flexible LEDs and wearable electronics make their way onto the catwalk, the boundaries between chemical technologies, fashion and art are likely to become ever more blurred. Or you might say, chemistry seems set to become woven ever more intricately into the fabric of our daily lives.