The dynamo at the forefront of electrochemistry 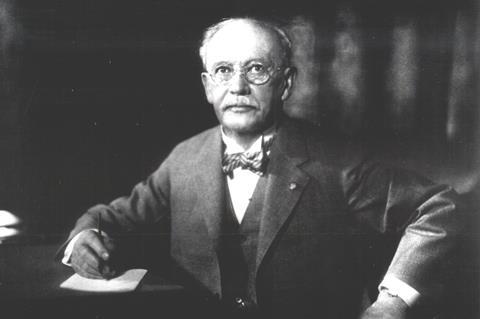 Chemist and engineer whose inventions created rivalry with Thomas Edison

Technological transitions are fascinating to watch, even when you are in the middle of them. The latest is one that is viewed by some chemists with alarm: the drive to ‘electrify everything’. But the trend is nothing new and a British-American chemist is a forgotten figure from its early days.

Edward Weston grew up in Wolverhampton, UK. He would later reminisce about an incident that took place around 1857, when he was seven years old. Visiting a chemist’s shop, he spotted a strange machine consisting of a large red magnet, a large crank handle, and coils of copper wire linked to two brass cylinders. The man behind the counter told him to grasp the cylinders and then proceeded to turn the handle. The electric shock caused the boy to scream in surprise and delight; he then demanded that the man do it again. And again. And again.

If the story may be a later embellishment there is no question that Weston had an unusual love and aptitude for tinkering. He began reading science books at age nine and became a huge admirer of Michael Faraday, reproducing his experiments in a home laboratory. He also spent long hours exploring the many factories across the city. It seems extraordinary that a boy, barely a teenager, could enter a gas works or steel foundry to watch and ask questions of the workmen. But the result was that he developed an almost innate familiarity with the workings of industrial chemistry.

He did well in school and was eventually apprenticed to an elderly doctor. He hated the work, in spite of the unfettered access to the prep room, where he could do experiments. After a series of rows he set out to London with a letter of introduction to John Tyndall, who had succeeded Faraday at the Royal Institution. On the way he met an American tourist who convinced him that the US was the Land of Opportunity. When his visits to Tyndall came to nothing, he used what little money he had to buy a ticket to cross the Atlantic.

Through a combination of luck and bravado he was eventually hired by an electroplating company that was on the verge of bankruptcy. He spotted that almost every step in their process was done badly. Weston almost single-handedly turned the business around while finding the time to experiment carefully with the electroplating process. His firm became the leader in nickel plating until a successful lawsuit for patent infringement and a sharp rise in the price of nickel bankrupted it. Cocky young Weston found himself on the street without a job. Over the next few years he moved from one position to another, always hoping for something more permanent.

In 1872 he found an investor, George Harris, who was prepared to put money into electroplating while knowing little about it. Weston’s dream was to devise a more compact and reliable source of electricity than the fiddly batteries that were in use at the time. What he needed was a dynamo. While the science of magnetic induction was, by then, well understood, heating was a big problem: the heavy iron cores around which the coils were wound developed huge eddy currents that resulted in strong heating under load. One solution proposed by the Belgian Zenobe Théophile Gramme was to wrap the coils round bundles of iron wires.

Weston built his own prototypes to see what was possible. His key innovation was to break up the cores into a series of thin elements laid side by side to minimise the paths of eddy currents. He also used thicker wires for the windings to reduce the resistance in the dynamo itself. The result was a series of extremely small dynamos the size of a shoebox that had efficiencies of over 90%. Yet in spite of this seeming triumph he struggled to get any electroplating firm to accept his new-fangled power generator.

Throughout this entrepreneurial period of history, patent disputes loomed large. Weston spent huge amounts of time in court battling his commercial opponents, struggles that he found both enraging and exhilarating. Eventually he ran out of steam, and quietly moved out of New York City.

He now provided consultancy services in electroplating, but also tried to develop his dynamo business from his home workshop. It was here that he came up with a significant innovation: the multipolar motor. Rather than having two zones, north and south, through which the coil would turn (producing two bursts of current per turn of the axis), his new design consisted of a ring of magnets alternating in polarity. It represented a complete leap forward in dynamo design. The patent was granted in July 1876. To Weston’s chagrin, when he presented his device at the Centennial Fair in Philadelphia in the same year it was almost completely ignored. A few weeks later, however, he received an offer. In exchange for a part interest in the royalties from his patents, he joined a firm that built dynamos. It was clear that this was where the big money was.

With the help of an investor, Weston then set up his own company: the Weston Dynamo Electrical Machine Company, the first electrical factory in the US. Next door, he set up a lab where he could develop new ideas.

In excellent timing for Weston, one of the highlights of the Paris Exhibition of 1878 was the illumination of the Avenue de l’Opéra by a row of electric arc lights set up by the Russian inventor Paul Jablochkoff. Weston had been building prototype electric arcs powered by his dynamos since 1874. He began to make his own rods, baking carbon black and asphalt in a furnace and churned out improvements. He plated the ends of the rods in copper to improve the electrical contact and placed a rod of lime next to the carbon to put ions into the arc, mitigating the ‘deadening’ blue light with a hint of red, and providing an additional conduction path that reduced the flicker. His brilliant arc lights appeared in several cities and even on the Brooklyn Bridge.

He also got into the incandescent light business. Here again he introduced real innovations, including a chemical vapour deposition method for making even carbon filaments. While he was unable to improve on the Sprengel pumps needed to evacuate the bulbs, he invented the idea of the ‘getter’ to improve the vacuum. A small amount of thorium oxide would be heated under dynamic vacuum before the bulb was sealed. The resulting thorium would remove the last traces of oxygen when the bulb was first turned on, hugely extending the life of the filament. Then came his truly lucrative ‘Tamidine’ process for making carbon filaments from compacted nitrocellulose in 1882. He used these filaments in mammoth bulbs for street lighting.

In 1886 disaster struck. Not only did he become embroiled in a row over the management of the company, from which he resigned, but in his absence the workmen took shortcuts with the storage of the nitrocellulose sheets used in the bulbs. The entire factory burned down. This was followed by a series of lawsuits filed by Thomas Edison. Weston was forced to watch as one by one his patents were ruled as being covered by one of Edison’s. At a conference in 1893 Weston would bitterly remark ‘I can truly say that I have honestly endeavoured to discover the existence of any moral qualities in some electric light companies, and failed to find any.’

Weston retreated to his home in Newark, US. He was a rich man and built himself a large laboratory at the back of his house, complete with a steam engine and a five horsepower dynamo of his own making. With assistance he threw himself at an issue that had begun to obsess him. The measurement of electric current and voltage remained a real problem, involving heavy suspended magnets and complex corrections. Edison had invented a more robust electrolytic meter – what was missing was something more practical and portable.

Around 1880, Weston and a Frenchman, Jacques-Arsène d’Arsonval, had quite independently hit on the idea of suspending a coil in the field of a stationary magnet. The coil would swing when current passed through it, and a needle above the coil allowed the deflection to be measured. Weston was too busy to patent his idea; d’Arsonval is now credited with the earliest invention. But Weston’s design had one huge advantage: by winding the coil around a metal frame, he could use the very eddy currents that had dogged him before to damp the otherwise endless oscillations of the needle.

Turning this into an instrument required several more steps. Permanent magnets tended to lose their strength over time. After several months, Weston and his assistants realised that the gap between the poles was the source of the problem. Adding a piece of soft iron to act as a ‘keeper’ channelled the magnetic flux in a circuit, keeping the magnetic domains of the metal in long-term alignment.

Next Weston realised that putting a ‘shunt’ resistor in parallel with the coil would allow him to measure any current directly. But the shunts tended to heat up, changing their resistance; once more, as one wag put it, ‘Necessity became the mother of Weston’s invention’. He and his assistants systematically explored different alloys, eventually finding a mixture of copper and nickel (which he named constantan) with a small negative thermal coefficient of resistance. Another constant-resistance alloy, manganin, followed. In 1888 he presented a new instrument – an elegant box that could be used for different ranges simply by using a plug to connect shunts of different value. Thus the first small multi-range meter was born.

His tireless patent attorney now badgered him to protect his device and found him an investor to help finance a new company. The Weston Instrument Company found itself overrun with orders; they could barely keep up with demand. 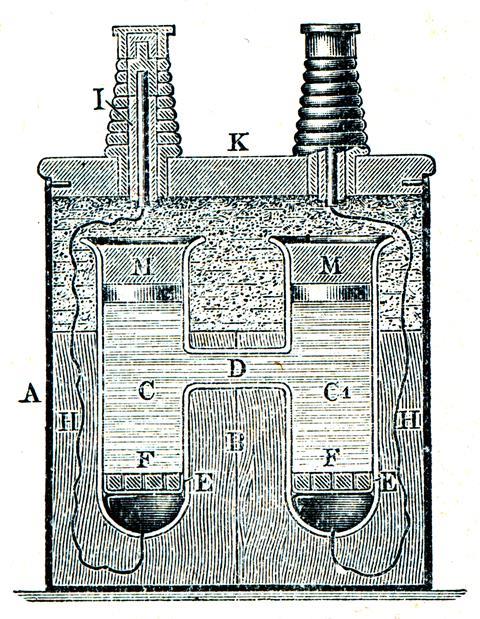 But there was one final problem to be solved. It was all very well to build an instrument to measure current and voltage, but how did you know your instrument was correct? Without a fundamental definition of the volt itself, measurement was hardly meaningful. The Clark cell, with a zinc and a platinum electrode dipping into zinc and mercury sulfate solutions respectively, generated a reproducible voltage, but it was annoyingly temperature dependent. After first devising (and patenting) a battery of Clark cells equipped with a sensitive thermometer, Weston switched his electrodes. Instead of zinc he would use cadmium. The new cell, announced in 1893, delivered 1.0183V and required much less temperature control than its predecessor. When the cell was adopted as the reference standard for voltage in 1903, Weston was so delighted that he waived the patent rights to it. Despite its imperfections, the cell would remain the standard until 1990 when at last the Josephson junction displaced it, laying the groundwork for the complete redefinition of the SI system.

Litigious, competitive and untiring, Weston drove himself and his assistants to the limit, fighting patent cases beyond the limits of good sense, and often forgetting to claim compensation when he won. As he grew older he tried his hand at golf (which he never mastered) and then cycling (which he loved) and finally bought a car – ironically one of the first gasoline powered models. Perhaps, channelling St Augustine, he thought ‘Electrify everything. But not yet.’