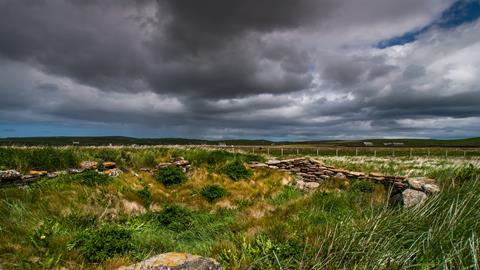 A land that time remembered

In the west of the Mainland island of Orkney, UK, lies a patch of damp ground, a mile inland from the Old Red Sandstone cliffs and dramatic sea stacks of Yesnaby. Here, visitors are grateful for a waterproof jacket to protect against the chilly grey of the Scottish summer. This boggy patch is Crudale Meadow. One would be forgiven for judging the ground beneath one’s feet a little unremarkable, but to do so would be a mistake – Crudale Meadow holds ice age secrets.

During an ice age, atmospheric water vapour is not returned to the oceans via precipitation, but trapped in ice. Glacial sheets are built at low temperature from snowfall enriched in H216O (relative to the isotopic composition of water in the oceans), as a result of the kinetic fractionation of oxygen isotopes during seawater evaporation into cold (dry) air. H216O has a greater rate of evaporation than H218O, meaning the oceans become enriched with the heavier isotopologue.

It follows that if one could measure the 18O content of seawater at any given point in the past, the loss of H216O through evaporation and the resulting volume of ice (as well as atmospheric temperature) could be determined. Fortunately, there is a direct correlation of H218O enrichment in seawater with raised 18O levels in the calcite (CaCO3) exoskeletons of ocean fauna.

It’s not quite that simple. Local salinity and biological factors specific to the organism must be taken into account, as must the temperature-dependent equilibrium constant for exchange of isotopes between water and carbonate (although this has a pretty small effect, with 18O content of shell calcite falling by <0.1% for every 1°C increase in ambient water temperature). Once these are adjusted for, the calcite becomes an accurate measure of the past – a paleothermometer, if you will.

At Crudale Meadow, beds containing intact mollusc shells and other calcite deposits constitute an incredibly precise record of abrupt climatic events across the late Pleistocene and early Holocene geological epochs. Isotopic analysis is carried out by reaction with dry and liquid state phosphoric acid, followed by analysis of the product CO2 using mass spectrometry. Acid dissolution of CaCO3 has a kinetic isotope effect that causes oxygen isotope fractionation, and it is necessary to take an independently measured fractionation factor a = (18O/16O)CO2/(18O/16O)CaCO3 into account. Carrara marble, or belemnite fossils of the Cretaceous period, are commonly used as a carbonate reference for this calibration.

Extrapolation of the data at Crudale Meadow reveals H218O enrichment between 12,900–11,600 years ago, indicating something of a cold snap during a period of general warming after the last major ice age. This was the devastating Younger Dryas period, the cause of which is currently debated. The isotopic records show that atmospheric temperatures in northern Europe fell over two centuries. In Scotland, the winter maximum was just
–13.5°C, with a mean annual temperature of around –2.5°C; cold enough for the accumulation of a major ice sheet of up to 1km thickness. Then, around 9600BC, the Younger Dryas came to an end. To a rather abrupt end. Over a duration of only 60 years the temperature rose by an incredible 10°C (±4), an unimaginable change within the lifetime of a human. In the early Mesolithic era, collapse of the ice cap caused catastrophic flooding, scarring the landscape of Scotland with a vast quantity of rocky debris.

The ratio of H218O /H216O in glaciers is influenced not only by the temperature at which seawater evaporation takes place, but also that at which condensation of atmospheric water vapour (into snow) occurs. Condensation of H218O is faster due to its lower vapour pressure. With both factors taken into account, measurement of 18O/16O in ice cores serves as another proxy for past temperature. Cores from Greenland, notably those sampled as part of the Greenland Ice Core Project (Grip), corroborate the Orkney mollusc data.

Following the drainage route of the burn at Crudale Meadow, a 10-minute hike along a track to the east brings you to the northern tip of the Loch of Stenness. From here, extraordinary Neolithic monuments of Orkney’s World Heritage Site peep above the horizon ahead; the Ring of Brodgar and Standing Stones of Stenness. The horizon to the south west is framed by the mountains of Hoy and, back along the path behind you, Crudale Meadow guards its secrets of the Younger Dryas. This place is very remarkable indeed.