We are all shaped by the opportunities afforded us, by the social structures and politics of our day

In 1906, Ivan Nazarov was born in the tiny village of Koshelevo, in the Russian province of Nizhni Novgoro to the east of Moscow. His family were peasants and Ivan worked daily as a farm labourer while attending the village school. After losing both parents before the age of fifteen, he and an elder brother assumed responsibility for their young siblings, and yet Ivan continued to study. Thoughtful and determined, here was a young man with prospects beyond his inherited life of hardship.

Nazarov became a schoolteacher in Koshelevo aged sixteen, and within a few years held the post of inspector for his district department of public education. By necessity he also continued to work his land, but in the early years of the Soviet Union everything was about to change. State policy for rapid industrialisation of a hitherto rural economy gave workers of low social class access to higher education, while government-owned and co-operative farming replaced individual land ownership, causing widespread disruption to agricultural production. Whether this change of circumstance was an opportunity that matched Nazarov’s existing ambition, or simply forced him to abandon rural life, it is hard to say – but he was admitted to study physical sciences at the Moscow Agricultural Academy in the late 1920s.1,2

Upon his graduation in 1931, Nazarov moved to Leningrad State University to research single electron reduction of ketones by sodium, under the supervision of Aleksei Favorskii who was a director of the USSR Academy of Sciences there. Within a few years, he had completed his work concerning radical anion (sodium ketyl) stability, and the Academy had relocated from Leningrad to Moscow. Favorskii was appointed to lead a new Institute of Organic Chemistry, and Nazarov accompanied his mentor back to Moscow. Here he would embark on a study of the chemistry of vinylacetylene (but-1-en-3-yne) leading to the development of the reaction for which he is remembered, and he would remain in Moscow for the rest of his career.

Favorskii had begun to investigate the chemistry of vinylacetylene in Leningrad, and Nazarov picked up the trail, turning his attention to the nucleophilic species H2 C=CH–C≡C– K+ and H2 C=CH–C≡C–MgBr.3,4 Adding these to aldehydes or ketones led to alcohol products that he named ‘carbinols’ – materials which polymerised very readily through stages of increasing viscosity before setting solid. During the second world war, in the early 1940s, Nazarov regularly travelled to the eastern front to advise the Red Army on military applications of this ‘carbinol glue’. These years were also when he published his key findings on carbinol reactivity. 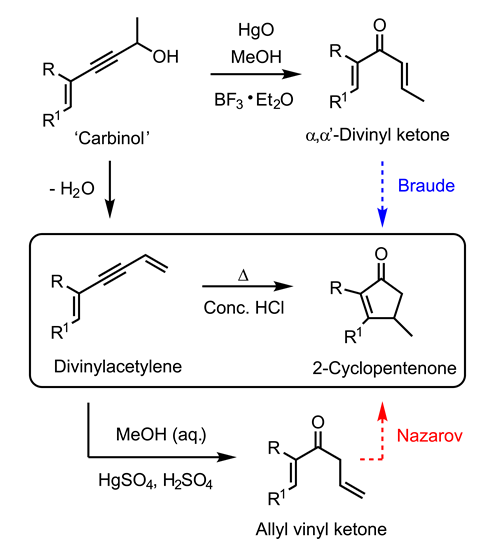 Nazarov showed that acid can transform carbinols into various ketones, and proposed a cyclisation pathway. But it was Ernest Braude’s proposed pathway that proved correct

However, he was unaware that he already held a clue to the true course of the cyclisation. Nazarov knew that mercury(ii) and Lewis acids could catalyse carbinols’ rearrangement to their α,α′-divinyl ketone isomers.7 But it was British chemist Ernest Braude who demonstrated in 1952 (using Nazarov’s conditions) that α,α′-divinyl ketones directly undergo acid-catalysed cyclisation to form 2-cyclopentenones.8 Braude proposed a pentadienyl cation intermediate (which we now understand undergoes a thermal 4π electrocyclisation to form the 2-cyclopentenone) and introduced the term ‘Nazarov cyclisation’ for Brønsted or Lewis acid-catalysed ring-closure of α,α′-divinyl ketones. The discovery would allow earlier examples to be identified,9,10 and the reaction would become a cornerstone of organic synthesis for many decades to come.11

In the late 1940s, Nazarov was appointed to the chair of organic chemistry at the Institute of Fine Chemicals in Moscow. Research had almost ceased there in the post-war years, but Nazarov restructured and revived it. Under his leadership the laboratory flourished and he became respected as a brilliant and enthusiastic leader and scientist. After attending the 16th International Congress of Pure and Applied Chemistry in Paris in 1957, he died suddenly in France before leaving for home.

There is a footnote to the tale. Carl Marvel, working at the University of Illinois, US, in 1933, had hydrated a divinylacetylene under forcing acidic conditions nearly identical to those used a decade later by Nazarov.12 Marvel obtained the corresponding allyl vinyl ketone – and a second product that he identified to be cyclic. Like Nazarov, he assumed the allyl vinyl ketone was an intermediate, but mistakenly proposed a 3-cyclohexenone product. This Soviet story was almost made in America.