Periodic tales: the curious lives of the elements

Periodic tales: the curious lives of the elements 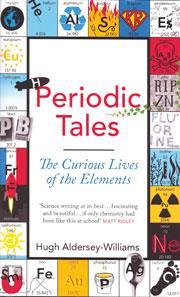 It must be galling to an author when someone brings out a book on the same subject a few months ahead of you. Sam Kean’s The disappearing spoon  was published last November, both books giving similar treatment to the periodic table of elements.

Nevertheless, with 2011 being the International Year of Chemistry, it should not be surprising that there were several books published on that iconic representation of chemistry - the periodic table.

One difference from Kean’s book is that Aldersey-Williams book is more autobiographical and outlines a number of personal household experiments which he carries out to illustrate the properties of the elements under discussion - such as pouring molten lead into water to produce weird shapes from which one’s fortune can be told and extracting phosphorus from one’s own urine.

Periodic tales  probably contains more chemistry and less physics than The disappearing spoon. It is particularly strong on colour chemistry, for example in fireworks and pigments - a subject of special interest to the author. I was particularly interested to read about Roy Lancaster, the firework guru, as I met him on one occasion, and about Andrea Sella - the writer of Chemistry World’s Classic kit page - and his mercury bell. The disappearing spoon, on the other hand, emphasises the dark side of the chemical elements, especially the way that they have been used in the perpetration of crimes.

Both books romp about the periodic table to such an extent that the reader can lose the train of thought. Both books are, however, varied and interesting throughout, giving the reader new insights and asides on the elements.

Neither of these books is a history of the development of the periodic table, a group-by-group discussion of chemical properties or a discussion of recent variations in the presentation of the table. For these the reader should consult such books as that by Eric Scerri (see below).

Aldersey-Williams and Kean have, on the other hand written popular science texts with the aim to amuse and inform at the same time. Both combine arts with science, but I found more on the literary and arts side in Aldersey-Williams’ text, reflecting an author with exceptionally wide interests.

Other related books and resources