Chemistry of the solar system

Chemistry of the solar system 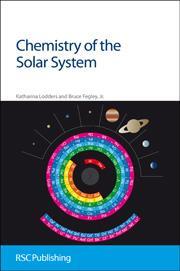 This book aims to provide an introduction to selected topics relating to the chemistry of the solar system. The authors admit in the preface that making the choice of topics for the book was difficult. Their choices have resulted in chapters focusing on elements in the solar system, meteorites, the solar nebula, bodies in the inner solar system, terrestrial atmospheric chemistry, the greenhouse effect and biochemical cycles on Earth and the outer solar system.

These themes are, in general, treated in significant depth, including many historical asides on the development of various key concepts. For example, the nine or so pages of discussion on the density and structure of the Earth present a chronological overview of the ideas developed in this field, beginning with William Gilbert in 1600.

I appreciated the abundant data, in tables and figures, to support the arguments presented. These data range from elemental abundance ratios in meteorites to the composition of the Earth’s biosphere. The depth of treatment, the data presented and the associated detailed discussion perhaps make the book more a valuable resource for professional researchers rather than the general reader, although the latter is clearly identified as part of the target audience.

With a background in astrochemistry, most chapters of this book introduced me to a wealth of new information. However, the level of detail in the discussion does not make the book an easy read. The account also takes many pages to reach what a conventional chemist might recognise as ’real chemistry’. However, I felt the more overtly chemical topics that are discussed would be more familiar to the general chemist, but in a single chapter these large topics cannot be covered in sufficient detail for the specialist reader.

This book will be a tremendous resource for scientists wanting to familiarise themselves with the development of specific topics in planetary science. However, some of the topics are presented at a level of detail that might make the casual chemical reader a little wary.

The prize draw has now closed.