Giant molecules from nylon to nanotubes

Giant molecules from nylon to nanotubes

This popular science book traces the past history, presentubiquity and future developments in the world of giant molecules - both naturally occurring and man-made. 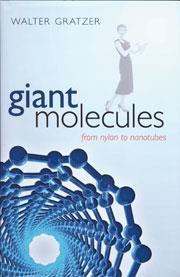 Gratzer starts with an outline of the structure and properties of proteins (fibrous proteins like collagen and elastin, and globular proteins, especially enzymes). He then proceeds to outline the polymers involved in the storage of food - starch, cellulose and other polysaccharides. Finally the nucleic acids DNA and RNA are introduced to readers. All these classes of polymer are described in simple language and related to everyday substances.

Giant molecules  then surveys the diversity of man-made polymers - rubbers, plastics and the carbon polymers, graphene and carbon nanotubes. We are shown how manipulation of the length, branching and overall 3D shape of polymer chains has led to the huge variety of polymer properties known today.

Finally, the reader is introduced to the recent interest in the interdisciplinary science of biomimetics - in which chemists, physicists and biologists have examined (and sought to copy) the properties of natural materials in the development of new materials, including supramolecular polymers, liquid crystals, photonics etc. The last chapter of the book deals with current and possible future applications of DNA nanotechnology - DNA machines, DNA enzymes, DNA sensors, self-assembled DNA patterns and DNA computers.

Giant molecules  is well written, with sketches of the events and people behind the discoveries. The further reading list of general articles will enable general readers to explore further, while the list of supporting scientific references will prove useful to more specialist readers.