The Open Laboratory 2009. The best of science writing on blogs

The Open Laboratory 2009. The best of science writing on blogs 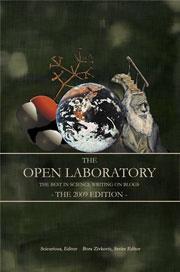 Over the past few years there has been a boom in the number of people blogging - some writing about their daily lives or about an issue they care about. Once dismissed as idle chatter, the blogosphere has become one of the ’game changers’ of the internet. At a time when science is often presented in the media as a secretive closed shop, thousands of scientists and science writers are presenting, explaining, arguing, and discussing scientific results both old and new.

The results are astonishing, as this book clearly illustrates. Some are blow by blow accounts of daily life in the lab, with its gossip and humdrum progress. Others are critical reviews of the literature, analysing and summarising the state of the art in readable terms. The collection in The Open Laboratory is completely fascinating and I have been completely gripped by the quality of the writing.

And yet, there is a nagging worry. As Cass Sunstein observes for US politics in his book Republic.com 2.0, in science too there is a tendency towards ’siloization’. For all the openness that blogs bring, we read and link to the blogs that think like us. Those of us concerned about climate change will read blogs about that. And those who deny it will read another set with no overlap. The result is a dialogue (if any at all) of the deaf, because of the absence of a common forum for a wide spectrum of debate. Thus for all the excitement of the blogs, it is salutary to come back to the mainstream, ’broad-church’ publications and magazines that expose us regularly to a less comfortable but intellectually healthier broad range of views.

This book is a great read covering a huge range of ideas. But we should also remember the bigger and often less comfortable picture.