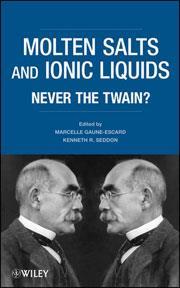 This book presents a collection of papers that represent some of the key talks at the 21st EuChem Conference on Molten Salts and Ionic Liquids in Hammamet, Tunisia, in 2006. A key focus of the meeting was to bring together the seemingly divergent fields of ionic liquids and molten salts and demonstrate that they are, in fact, two branches of the same field that are separated only by working temperatures.

The book continues this theme, bringing together papers from both areas and contributions that build bridges between the two (such as the review articles from Angell and Johnson).

A wide range of topics are covered in the book, from electrochemistry and metal deposition to spectroscopy and organic chemistry to name but a few. As such, there is likely to be something here to suit most tastes and there are plenty of articles that draw the reader into a new area of the field.

The book is sure to appeal to researchers already in the field of ionic liquids/molten salts, and those new to the area will likely find the review articles contained within enlightening and the philosophy behind this work, namely the unification of the field, a good position to begin their investigations into these fascinating materials.