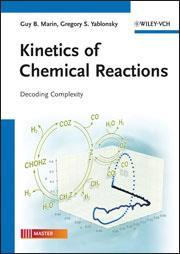 The aim of this book is to provide a framework with which to understand and predict multicomponent kinetics within chemical reactors. In particular, much of the book is given to understanding catalytic action and therefore the optimisation of catalysis conditions. Three methodologies to understand complicated kinetics are discussed: thermodynamically consistent approaches, analysis of kinetic fingerprints, and non-steady state kinetic screening.

The chapters are written in a chatty style and are divided sensibly, producing a smooth read. However, the text is not shy of using complex mathematics to attack the problems at hand. There is a keen sense of history running through the text and a deliberate motivation behind the book is to pay special attention to the Russian school of chemical kinetics, for reasons of posterity. The repeated historical forays are often interesting but they limit the use of the book as a reference text which can be used to quickly find information.

The stated target audience is lecturers and students, both undergraduate and graduate, of chemistry, physics and chemical engineering. The style and assumed knowledge lends itself towards the mathematically inclined end of the spectrum. This book will be challenging for chemistry undergraduates who will find difficulty in relating their kinetics course to the book content - for example, the Arrhenius temperature dependence is only mentioned in passing. It will be most useful to those chemists who have an interest in chemical engineering and/or the kinetics and mechanisms of catalysis within chemical reactors.