Catalytic RNAs in all guises 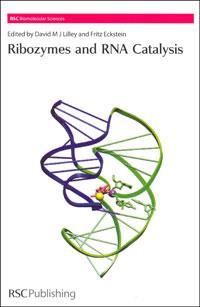 Twenty-five years after the discovery of RNA catalysts (ribozymes), new developments continue to reveal the remarkable resourcefulness and unanticipated roles of RNAs, belying their original label as passive information carriers. This engaging book opens with an introduction by the editors where they describe the catalytic strategies and biology of ribozymes, and provide a persuasive rationale for studying them. What follows is a series of articles by experts who bring to a sharp focus the nuts and bolts of ribozymes, small and large. Understanding catalysis is inescapably enmeshed in an appreciation of the chemistry and microenvironment of the catalyst’s building blocks. A strength of this book is that recent strides in RNA structural biology are used to showcase how nucleobases and divalent metal ions like magnesium are exploited exquisitely, albeit seldom predictably, for accomplishing difficult chemical transformations that are typically expected of their more versatile protein counterparts. Moreover, the travails of RNAs as they traverse the folding landscape where kinetic traps prevent them from reaching their functional native state resonate as a recurring theme.

There is much to be learned from this volume. Lessons in chapters such as that on proton transfer in RNA catalysis underscore thematic parallels in all biocatalysts regardless of their complexity and makeup. The power of sophisticated tools (eg, single-molecule fluorescence, time-resolved footprinting) to address issues related to RNA folding and activity is instructive and inspiring. The perils of Occam’s razor exemplified in the minimisation of the hammerhead ribozyme tell a cautionary tale for reductionist approaches. The existence of shades of colour in interpreting kinetic data, which are consistent with multiple models, should motivate newcomers by highlighting that challenges remain in deciphering the mechanism of action of ribozymes.

Like any collection written by multiple authors, the chapters do vary in length and style, with occasional redundancies. Although individual chapters are well-referenced and provide an excellent gateway to recent literature, the uninitiated might profit from a primer on current methods used to study ribozymes.

I recommend this to anyone passionately interested in understanding biocatalysis and suspect that ribozyme aficionados will acquire a copy.