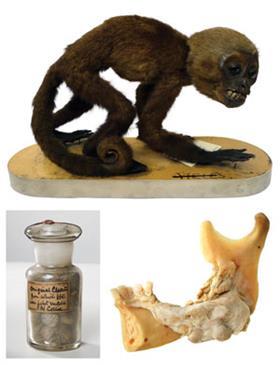 Chemistry is inherently creative – it ‘creates its own object’ as Marcellin Berthelot once said. As material manipulators, corralling atoms and molecules out of contented equilibrium, chemists have as much in common with craftsmen and artists as scientists. And each practitioner must approach their art accepting its inherent risks and dangers – both the known and unknown.

The curators of this exhibition at UCL, Emma Richardson of the History of Art department and Sarah Wilkes of the charmingly named Institute of Making, explore these creative endeavours through the objects that present, prevent and circumvent that danger. These objects are the ‘diaries’ of those individuals who encounter them in their day-to-day lives.

The concept considers creation or ‘making’ through the makers themselves and the exhibition has gathered contributions from a range of trades, arts and disciplines that represent the ‘perils of production’.

But as a chemist wandering among the exhibits, Dangerous diaries could equally be considered a history of chemistry in objects. In many cases, the danger presented by an exhibit is ultimately chemical. This gives chemistry’s empirical, experimental essence a sobering perspective, as each exploratory step often involved an inadvertent toxicological experiment as well. Many of the exhibition’s artefacts illustrate the high cost of lessons learned by experience: x-ray induced tumours on a radiographer’s knuckle; radium’s tragic assortment of cancer victims; a child’s toy car, its poisonous lead paint peeled and picked.

Of course chemistry also provides treatments and safeguards. Lab coats, gloves and safety glasses, for example, are part of chemistry’s iconography and perhaps more recognisably chemistry than its ‘object’. The PPE on display here apparently stands in contrast to a cabinet filled with talismans and charms that were once clutched to invoke protection from harmful forces. But equally, we might pause to consider a similarity in the false security of gloving-up regardless of the situation.

UCL researchers who have tackled these issues also feature, of course, notably the Haldanes, who dedicated much of their lives to improving conditions for workers in hazardous occupations. Chemistry World regular Andrea Sella, who has often discussed safety training in chemistry labs, has also provided a sealed bulb of white phosphorus, created especially for the exhibition – an act of making that embodies the exhibition’s themes. (The owners of some of these objects must enjoy an extra frisson of danger seeing their precious archive in such combustible company.)

In fact, the best time to view this exhibition may actually be when it closes – I am assured that Sella will mount the steps outside UCL’s Wilkins building and lob his globe onto the stony quad below. What more fitting end to an exploration of creation than to (safely and securely) surrender the object to its fiery unmaking?

Admission to the exhibition is free. Find out more here