Robert William and John Rowlinson, best known to chemists for their research achievements and monographs, have with chemistry historian Allan Chapman, edited an account of the origins and idiosyncratic emergence of Oxford’s distinguished chemistry. 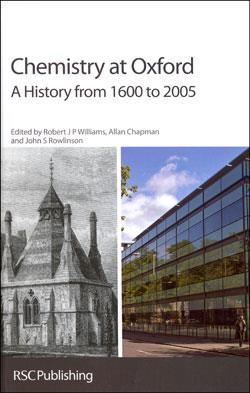 After early alchemists and apothecaries, Robert Plot (with Ashmolean basement laboratory) became the first chemistry professor in 1683. The subject then declined so that 18th century teaching served mainly anatomy.

Later Vernon Harcourt in Christ Church, one of several college laboratories, published prodigiously on kinetics, in contrast to the small quantity published by the non-Oxonian Aldrich/Waynflete professor (1872-1912), William Odling, although the latter helped establish the Institute of Chemistry (a progenitor of the RSC).

Many will find of most interest Williams’ frank survey (one-third of the book) of Oxford chemistry 1945-2005: people, organisations, research and teaching. There is an engaging portrait of life as a chemistry fellow/lecturer 1945-1980 until overtaken by the quest for results, recognition and resources.

Williams emphasises the haphazard college-based bottom-up (rather than rational or visionary) evolution in an arts-based university and charts the changing balance between the three power bases of colleges, universities and laboratories with professors.

Williams (in Oxford from 1944) distinguishes the practical industrially linked research style established by Perkin from what Williams describes as intellectual - understanding chemical systems - typified by Hinshelwood.

Questions raised include democracy versus intellectual and instrumental coordination in a combined department, research institutes versus individual brilliances, and tutorials from fellows/managers for undergraduates reared on broader school science. Williams even wonders whether Oxford’s Part II theses (the basis of historical chapters by Chapman and Peter Morris) can become too specialised.

This history provides a fine basis for such reflections.