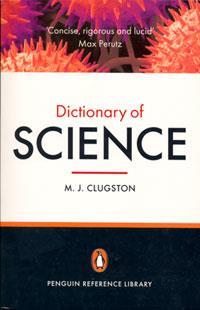 The Penguin dictionary of science  has a long pedigree, having been first published in 1942, edited by Eugene Uvarov, going through seven editions, co-edited by Alan Isaacs, until 1993. I had one of these old editions and found it extremely useful at university. The dictionary was then relaunched as the (New) Penguin dictionary of science  in 1998, edited by Michael Clugston with a team of assistants, and in this form has been published in three editions, the second in 2004 and the latest in 2009.

This new edition like its predecessors, covers the whole range of science from chemistry, biochemistry, physics and mathematics to astronomy, geology, molecular biology, and computing, giving good concise definitions of the major terms used in these diverse areas.

It makes an excellent desktop reference work for anyone involved in the reading or writing of science, but lacks sources for further reading, instead giving cross-references which send the reader round and round the dictionary itself. Also, one wonders if today there is still a need for such a work, when most enquirers seek web definitions of scientific terms.