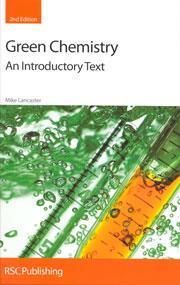 These two second editions seek to provide introductions to the subject of green chemistry, which is an established part of today’s undergraduate and postgraduate chemistry courses.

Lancaster was the former manager of the UK’s Green Chemistry Network, and his book, Green chemistry: an introductory text, is a genuine introduction to the subject for undergraduate and postgraduate students, based as it is on clean chemical technology modules taught at the University of York. Much of the book should be understood by a general readership.

Starting from the 12 principles of green chemistry expounded by Paul Anastas in 1998, Lancaster, in a series of well written chapters, discusses such topics as waste minimisation, catalysis, solvents, environmental performance, renewable resources and alternative energy sources.

Lancaster’s book is not just about green chemistry in the laboratory, but has several chapters on the industrial scene - developing greener technologies and processes as illustrated in a series of industrial case studies. 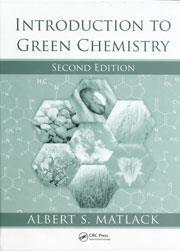 Matlack has been involved in the teaching of courses on green chemistry at the University of Delaware, US, since the late 1990s and his book, Introduction to green chemistry  , is a much longer more scholarly work. There are literally thousands of scientific papers, books and reports referenced throughout this text, which doubles as a teaching text for the advanced student and practitioner, and also as a reference work to go back to again and again.

This second edition has been expanded from the first, and includes more detailed treatment of subjects which have become recent focuses of research, for example fluorous biphasic catalysis, metal organic frameworks, process intensification, dynamic kinetic resolutions of optical isomers, and directed evolution of enzymes.

An interesting feature of this text is the practical exercises at the end of each chapter encouraging the reader to apply the various principles under discussion, and to visit local good and bad examples of green chemistry.