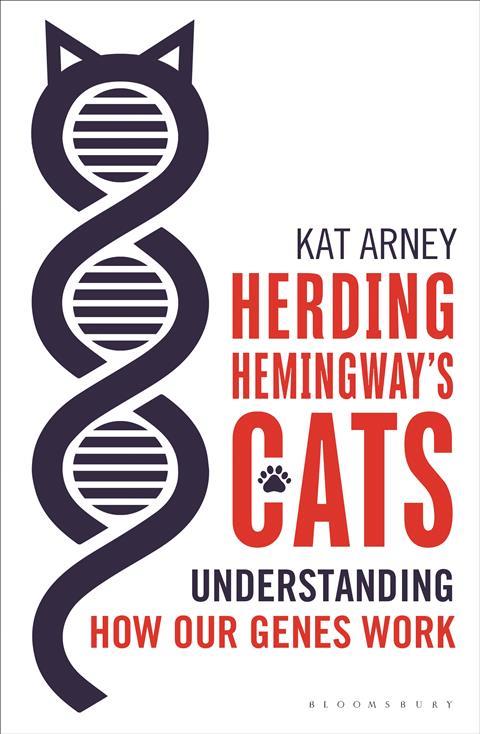 Genetics is one of those topics we all like to think we understand. We hear a lot about it in the news – particularly about the ‘discovery’ of new genes that can be linked to particular diseases or characteristics. We’re now quite used to the thought that ‘gene X causes outcome Y’, or something along those lines.

The reality is a much more complicated picture that Kat Arney sets out to untangle in Herding Hemingway’s cats. Her mission is to unravel some of the subtleties behind what we read in the papers.

The titular cats are the six-toed creatures living at Ernest Hemingway’s former residence in Florida, whose extra digits are a result of a fault in a molecular switch that controls the amusingly named Sonic hedgehog gene. It was hearing about these many-toed moggies, says Arney, that inspired her to write a book about how our genes work – or at least, what the research has told us so far.

Her account mixes stories from science history that are probably familiar (I can’t imagine a genetics book that doesn’t mention Mendel’s peas or Dolly the sheep) with accounts of her own experiences interviewing today’s leading geneticists, and an in-depth look at some of the very latest research.

A lot of the basic concepts are dealt with using analogies. Our ‘junk’-filled genome is like a messy garage, the cell nucleus like a library of DNA ‘recipes’ that must be copied and taken out so that tasty protein ‘dishes’ can be made. It’s definitely the sort of book I would have devoured back when I was an 18-year-old budding biologist – it reminded me a lot of classics like The language of the genes and In the blood (both by Steve Jones) that kickstarted my enthusiasm in the subject.

There is discussion of recent hot topics – circular RNA, microRNAs, epigenetics – some of which are so new they still provoke a lot of disagreement among scientists. Arney does a good job of dissecting the issues and explaining why researchers currently lack the techniques to un-muddy the waters. She also warns against the dangers of leaping to conclusions based on oversimplified, shaky evidence. The language often used by journalists, who discuss a gene ‘for’ a particular characteristic, comes under fire early on in the book, although to her credit Arney admits she has been guilty of this in the past.

Though I really enjoyed the feel of the book, and the light, almost conversational style of the writing, I must admit that reading it gave me uncomfortable flashbacks to hours spent scratching my head during lectures and puzzling over a tangled mess of difficult concepts. A decent chunk is spent explaining the importance of genetic switching mechanisms, for example, which can quickly become difficult to contemplate. At the end of the day, genetics is hugely complicated, and we certainly don’t have all the answers yet. One of Arney’s final thoughts sums up the situation rather well: ‘If you were hoping for a nice, neat conclusion to this book wrapping everything up and explaining how your genes work then I’m afraid there isn’t one.’

For an excerpt from the book, an interview with author Kat Arney and our thoughts on Herding Hemingway’s cats, listen to our Book Club podcast