Geek nation: how Indian science is taking over the world

Geek nation: how Indian science is taking over the world 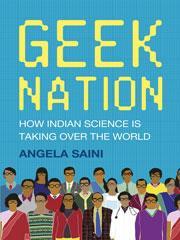 Angela Saini’s Geek nation, although a gripping narrative based on facts, unfortunately has a deceiving title and presents a skeptic’s take on modern Indian science.

Saini’s journey takes the reader through Delhi’s Institute of Genomics and Integrative Biology, the hi-tech billion dollar city of Lavasa, the Silicon Valley of India in Bengaluru to the Tuberculosis Research Centre in Chennai. Showcasing probably a selection of the very best Indian science, the book also delves into the pseudoscientific beliefs and superstitions that are widespread in the country.

Where a booming economy is coupled with the ever growing number of science and engineering graduates, it is a mythical belief that India is on a trajectory to become the hotbed of innovation. Saini puts that perspective to rest by showing that what Indians are very good at are innovations to make things cheaper. But that is what Japan focused on in the 1970s when it founded its electronics industry. Leading from which, by the 1990s, it was the country that was the leading innovator in the sector. A story Saini hopes India might repeat for all its scientific endeavours.

I recommend Geek Nation  to all those who would like to understand what Indian science is all about.