This compact book is a wonderful source of information on antimatter 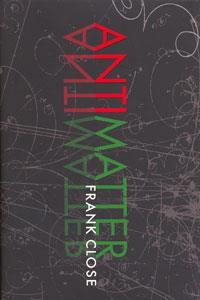 All chemical reactions, all biological processes, and all living entities function by converting mass into energy and all such conversion processes involve the movement of electrons located in the outermost parts of atoms and molecules. However, in these processes the amount of matter converted into energy is infinitesimal, around one part in a billion. A significantly more efficient conversion takes place in nuclear reactions, such as those occurring in atom bombs, where the conversion rate is about one in a hundred. At the other extreme, when matter comes into contact with antimatter, for instance electrons colliding with positrons, there is complete anihilation of all of the matter and a 100 per cent conversion of it into energy. Prodigious amounts of energy are then released, one antiproton alone yielding the energy equivalent of one billion electron volts.

It is thus no wonder that high energy physics laboratories such as Cern in Geneva have an intense interest in antimatter or that the US military is exploring the possibility of constructing antimatter weapons. The prospects of using this kind of energy for either domestic or military purposes are, however, virtually zero. It takes more energy to create the antimatter in the first place than can ever ultimately be released and to amass a mere nanogram of antihydrogen (a positron bound to an antiproton) would take about 1000 centuries at current rates of production.

But antimatter is not without practical applications. An example from medicine is PET (positron emission tomography) scanning which involves irradiation of part of the human body with positrons from radionuclide decay. The positrons self-destruct as soon as they hit electrons and yield energy as flashes of gamma rays. The latter are detected and used to build up an accurate picture of the tissues in the irradiated area. Thus, although antimatter is certainly anti matter in the sense that it destroys matter entirely, it does have its uses.

This compact book is a wonderful source of information on antimatter and offers us a meticulously researched account of the nature, properties and applications of the often overlooked entities in the fantastic antiworld all around us.