Is it really true?

Do polar bears get lonely? And 101 other intriguing science questions

Do polar bears get lonely? And 101 other intriguing science questions 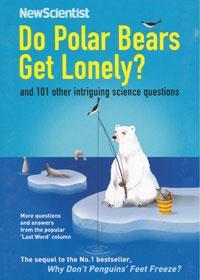 Do polar bears get lonely?is another in the successful series of collections drawn from the  Last Word  page in New Scientist, following  Does anything eat wasps?, and  Why don’t penguins’ feet freeze?  As in the previous books, this one consists of questions the reader has never dared to ask, followed by one or more attempts at a sane, scientifically based answer.

This year’s questions and answers again make an enjoyable read. Two questions in this year’s crop might be particularly relevant given the current economic woes - can a family of four keep themselves fed using only eight square metres of land? And, in a worst case scenario, if one had to eat parts of oneself, which non-organs would be the most nutritious? Nails? Hair? Earwax? The answers are not very encouraging.

And do polar bears get lonely? Well, it’s a rather anthropomorphic question, because for big predatory animals like polar bears one’s company and two’s a crowd. The animals need large individual territories to survive, and just pair up during the breeding season to reproduce. Mind you, many of us probably know some human beings who live like that - spending most of the year on extended business trips punctuated by the occasional visit home.

If you like these intriguing science questions, perhaps you should regularly visit the  New Scientist  Last Word website and blog.