Junk DNA: a journey through the dark matter of the genome 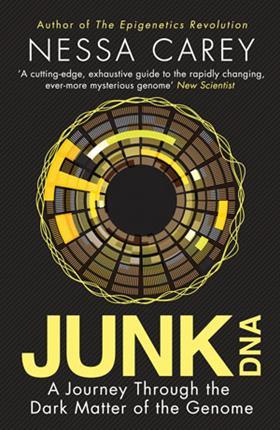 The term ‘junk DNA’ was coined in the 1960s and refers to regions of our DNA that don’t code for proteins. Such an idea implies that these regions have no function, but, as so often happens in science, scientists have come to realise this is far from true. Much controversy now surrounds the term’s relevance and, as Nessa Carey succinctly puts it, ‘ask three different scientists what they mean by the term “junk”, and we would probably get four different answers’.

Regardless of the terminology, these non-coding areas of our DNA are far from being without function. Whether regulating gene expression and transcription, or providing protein attachment sites, this once-dismissed part of the genome is vital for all life, and this is the focus of Junk DNA.

Over 20 chapters Carey attempts to translate the complex science into an accessible guide for the non-geneticists among us. Whether relating protein translation to knitting socks for soldiers, discussing structural integrity with reference to Star Trek, or using a tiny Spiderman clone to describe the centromere’s role in cell division, her analogies are often bizarre, yet always effective. She turns complicated concepts into everyday situations in a way that’s sometimes more baffling than the science itself. She explains the intricacies of how our ever-expanding knowledge of junk DNA has helped us to diagnose and treat diseases and to understand human evolution.

If you’re interested in genetics and its complex role in health and disease, this book is an entertaining and informative guide to an area that is rarely covered in popular science writing. Or, if you simply want to find out how Carey can explain the complex workings of the genome by referencing the Bugatti Veyron and a 1970s swingers party, Junk DNA will not disappoint.