Metal-carbon bonds in enzymes and cofactors

Metal-carbon bonds in enzymes and cofactors 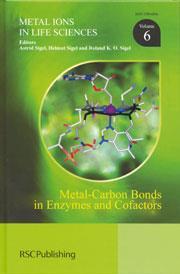 This, the latest in theexcellent Metal ions in life sciences  series, focuses on biological molecules that contain a metal-carbon bond. The most familiar molecule of this class is coenzyme B12, whose structural determination in 1956 by Dorothy Hodgkin confirmed the presence of a cobalt-carbon bond. This was the first such example, arguably marking the beginning of the field of bio-organometallic chemistry and contributing to Hodgkin’s achievements recognised with the Nobel prize for chemistry in 1964.

B12 remains well studied today, partly due to the fact that its biosynthesis is achieved only by microorganisms and that dietary deficiency results in pernicious anaemia in humans. Indeed, such research is still revealing some molecular surprises, such as the relatively recent discovery of the B12-sensing riboswitch that regulates gene expression in response to available B12 concentration.

After dealing with the organometallic chemistry and enzymatic utilisation of B12 in chapters one and two, this book concentrates primarily on the interaction of CO and CN- with metal ions. These latter ligands are usually regarded as solely toxic molecules, but perhaps surprisingly are physiological ligands to Fe and Ni ions in the active sites of hydrogenase enzymes, whereas CO is produced by the activities of metal-dependent enzymes such as haem oxygenase and acetyl coenzyme A synthase. They are also useful as spectroscopic tools to interrogate a range of metal binding sites for chemical and structural information in vitro, covered in later chapters.

As with all books of this series, the combination of cost and subject matter means that this book is predominantly intended as a primary resource for researchers working in the field, but will surely also prove useful for undergraduates as a gateway to the subject with its extensive reference list.