Wetware. A computer in every cell

Wetware. A computer in every cell 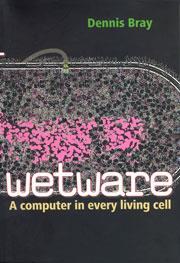 As Dennis Bray points out, early computers were described using terms appropriated from the nervous system, for instance memory and control etc. It is logical then, that the analogy is now often turned on its head to describe biological functions in terms of computational elements such as logic gates and molecular circuits. Wetware  examines this concept for the general reader, drawing on a range of fascinating examples to demonstrate how cells process inputs into outputs.

Starting with a chapter on clever cells, the book examines life on the microscale, demonstrating the complicated processes that allow single-celled creatures to exist; from how an amoeba can devour prey several times its own size to how the sedentary protozoan Stentor unattaches itself from a surface to float off in search of food. In the chapters that follow, Bray outlines the molecular basis for cell functions and how these systems can evolve to achieve a better outcome. Interspersed are forays into the worlds of neural networks and robots where parallels with cellular processes are clearly drawn.

The book has a handy glossary but you won’t need it. Whilst Bray doesn’t shy away from using unfamiliar terms they are always explained in context. For a book delving into systems biology and comparing specific examples of biological processes to computational systems that’s quite a welcome surprise. But whilst the style is elegant and very readable, the reader shouldn’t expect to read this in one sitting; there’s a lot for one’s clever cells to take in.