Now you see it: now you don't

Dazzled and deceived: mimicry and camouflage

Dazzled and deceived: mimicry and camouflage 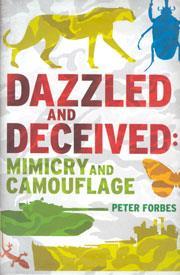 Mimicry was first observed in the 1850s by the young English naturalists Henry Walter Bates and Alfred Russel Wallace, who were studying butterflies in the Amazonian rainforest. The epoynmously named Batesian mimicry provided evidence to support Darwin’s theory of evolution by natural selection.

Since then it has been shown that thousands of creatures worldwide - from butterflies, moths and fish, to cephalopods, birds and snakes - imitate other animals or their surroundings to protect themselves; to attract and repel; to bluff and warn; to forage and to hide.

This book also describes Mullerian mimicry, where different species, each of which is distasteful to birds and other predators, mimic one another so that the number of losses of individuals within each species (eaten by predators who have yet to learn their lesson) is reduced. Papilio dardanus provides an interesting example where different forms of offspring are produced to improve the chances of survival.

In this well written and fascinating book, Forbes, a writer and journalist who trained as a chemist, portrays camouflage and mimicry as examples of how natural selection can act in subtle and surprising ways.

Since these early studies of mimicry, the means by which butterflies and moths mimic each other, or their surroundings, have been the focus of many controversies. Forbes discusses the theoretical debates which began in the 1920s: about whether evolution proceeds in small steps or dramatic leaps, and recent creationist attempts to discredit the hypothesis that peppered moths grew dark because these variants were better concealed from birds in areas blackened by industrial pollution. There are still many unanswered questions today on the precise mechanisms involved in biological mimicry among butterflies and moths.

Forbes goes on to show in several chapters that mimicry is not just a biological phenomenon but has many applications, especially in human warfare.

Based on the studies of the US artist Abbott Thayer on natural animal patterns and camouflage at the turn of the century, John Graham Kerr, professor of zoology at the University of Glasgow, sent a three-page memo to Winston Churchill, then first lord of the admiralty, suggested that the zebra be taken as a model for naval camouflage. In 1917, 50 British ships were painted in bold black-and-white patterns to reduce their visibility to German U-boats prowling the Atlantic. The shockingly modern patterning became known as dazzle, and the vorticist artist Edward Wadsworth was recruited to help execute the painted schemes.

In the second world war, camouflage through disruptive patterning and mimicry came into their own, with fake airfields and factories, inflatable tanks and other ideas, which reached their peak in North Africa, during the preparation for Montgomery’s offensive at El Alamein, before playing a major part in the deception plans before D-day.

This book is a delight to read and should open the eyes of readers to things which have been too well camouflaged for years.