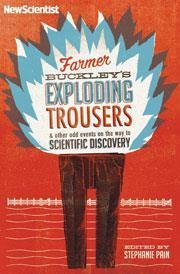 Exploding trousers is the latest book to be published by New Scientist which contains expanded stories originating from the magazine’s pages. This time the extracts come from the Histories column.

The vision of the book is to show that amazing discoveries aren’t just made by famous professors in isolated ivory towers. Newton may have seen further by standing on the shoulders of giants, but this book argues that a lot of regular-sized people making silly mistakes and muddling through can - over time - add up to a giant-sized scientific insight too.

Although the model of recycling magazine articles might feel a little tired, the book does deliver some genuinely amusing stories. The story in which a witch doctor tried to charge ?500 for her ’proven’ cure for excruciating bladder stones was particularly fun, and led in a convoluted way to Joseph Black’s rebuttal of phlogiston theory. Also, the account of two bygone era surgeons injecting cocaine into each other’s spinal fluid in an effort to invent anaesthesia is by turns fascinating and horrifying.

An illuminating volume, sure to provoke interest and amazement, Exploding trousers will make a great stocking filler for any scientist this Christmas.