According to the authors, the term ’relativistic effect’ denotes the deviation of results obtained in a theoretical framework, in accordance with the theory of special relativity, from those obtained by non-relativistic Schr?dinger quantum mechanics. 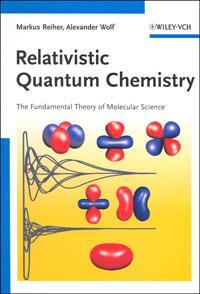 Truly accurate theoretical results are hard to come by, and you may reasonably ask ’what about experiment?’; the spectroscopic spin-orbit coupling parameter is essentially a relativistic effect, and it is negligible for first-row atoms but 10650.5 cm-1 for Pb.

For this and other reasons, it was (and still is) widely believed that relativistic effects are of little importance in mainstream organic and inorganic chemistry. There has been a change of attitude for the bottom half of the periodic table due to the pioneering work of Pyykk? in the 1970s, and the modern view is that molecular structures containing heavy atoms can only be treated correctly within a relativistic framework.

There is nothing particularly new about relativistic quantum theory; atomic calculations were first reported by physicists in the late 1920s. Everyday examples are explanations of the colour of metallic gold and the liquid nature of mercury.

This new book is divided into five logical parts. Part I treats Fundamentals  in 150 pages - including Newtonian mechanics, special relativity and basics of quantum mechanics. I was shocked to see Maxwell’s equations written in Gaussian form, for example:

’s and c’s that consequently litter the text. Few young researchers will recognise these equations as written.

Part II deals with Dirac’s theory of the electron, with once again the usual suspects: the Klein-Gordon equation, the free electron, and finally the Dirac hydrogen atom.

On to Part III, Four-component many-electron theory, and now we non-relativistic quantum chemists are on familiar territory with the Dirac-Hartree-Fock equations. Part IV Two-component Hamiltonians  gives a very accurate treatment of the Douglas-Kroll-Hess theory.

Finally, on to the pages I most wanted to read, Chemistry with relativistic Hamiltonians. I was disappointed. The most complex molecular systems reported are (for example) the gold dimer, UF6 and U2(OCHO)6. The big problem is that there is no commercially available relativistic software equivalent to Gaussian/ 03 or HyperChem.

This new book aims to be ’a reference to explain the principles and fundamentals in a self-contained, complete and consistent way’. I think the authors have achieved their stated aims, but the book is certainly not for the weak and, despite the authors’ protestations, it needs a high degree of mathematical competence. Given the price, it is not intended as an undergraduate text.