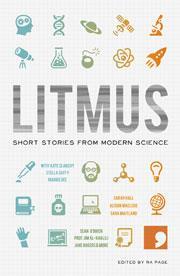 This collection of short stories was written by a group of authors in collaboration with scientists and historians of science. Its motivation is both laudable and slightly puzzling: to expand the range of scientific discoveries with which fiction deals beyond the usual canonical suspects; and to frame these as ’revelations of science’ which supersede creation myths. It is far from obvious that this is the most interesting way to dramatise what is significant about scientific discoveries.

The resulting book is uneven but usually intriguing. For myself, even those stories which did not work stand as interesting technical exercises about how literary authors represent technical detail. One feature which several stories share, for example, is that the practical details of a discovery become blurry, at the exact moment one would hope to visualise exactly the thrill of the new finding. Several of the stories launch off from this point to talk about how the discovery ’changed the world’: again this serves to remove focus from the moment of discovery itself.

For this reason, the stories which worked best (at least in my view) were those which de-centred the discovery itself, using the ways in which people talk about discoveries, and the effects they have on peripheral people or in other contexts. The piece which moved me most was Kate Clanchy’s   story Bride’s Hill, which is framed by the discovery of the Hippocampus. The story does not give a privileged insight into myths of discovery, instead it is about an ordinary woman who is fearful that her husband has Alzheimer’s disease. The story weaves together questions of what it means to make new knowledge and new experiences, in science and in ordinary life, with the fear of what happens when new discoveries are no longer possible.