Atoms and Eden: conversations on religion and science

Atoms and Eden: conversations on religion and science 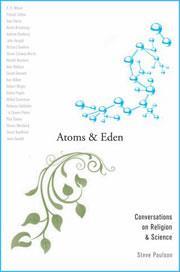 Atoms and Edenconsists of interviews with an eclectic assortment of 21 commentators on science and religion, interpreting these terms rather broadly. The interviewer works with a US public radio station and has long-term interests in the topic for reasons explained in the epilogue, which sheds light on the choice of interviewees, 17 of whom are based in the US, with two from the UK and one from the United Arab Emirates.

The book provides a fascinating insight into the views of personalities who crop up more frequently than others in the media context. They range from convinced atheists to equally convinced theists, with a wide spectrum in between. There are some real surprises. The enthusiastic American atheist Sam Harris is heavily into telepathy and the value of meditation. Jane Goodall describes her mystical experiences while out in the wild with her chimps. The robust atheist Steven Weinberg tells us that the idea of living in a meaningless universe ’bothers him very much’. The science-religion conversations are generally conciliatory and collegiate. It is left to the lone voice of Richard Dawkins to play the role of extremist (’To teach children that it is a fact that there is one god...is child abuse’).

The weakness of the book stems from its choice of interviewees who tend (with notable exceptions) to be more up the wacky, media-oriented end of the science-religion spectrum. This appears to stem from the author’s conviction that ’religion’ equates with the spooky and the mysterious, allied to mystical experience. But this is not where the present academic discourse between science and religion is located, being more focused on the interpretation of the universe as revealed by science than on its spooky dark corners. For those interested in the academic discourse between science and religion, I would look elsewhere.