Science behind your pint

Beer. Tap into the art and science of brewing

Beer. Tap into the art and science of brewing 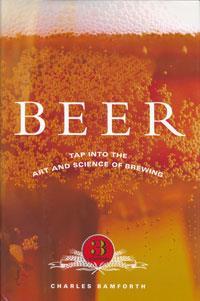 This excellent book on brewing, now in its third edition, is written by an internationally renowned ’beer scientist’ who has worked as a senior manager of the Bass brewery at Burton-on-Trent, visiting professor of brewing at Heriot-Watt University in Edinburgh, deputy director general of Brewing Research International and now professor of malting and brewing sciences at the University of California and special professor at the University of Nottingham. Hence he is ideally qualified to write on contrasting tastes, production methods and marketing techniques in the US and Europe (particularly the UK).

Bamforth starts with a good history of beer and brewing on both sides of the Atlantic, followed by a description of the basics of malting and brewing of top and bottom fermentation beers. This is then followed by chapters on the quality and health and nutritional properties of various beers, malts and the malting process and hops as a flavouring additive.

The science, including the chemistry, of the brewing process is split into three sections - the ’hot side’ involving the breakdown of malt and other materials to wort which acts as the starting material for the ’cold side’ of yeast fermentation to alcohol. The third section consists of downstream processing, including clarification, stabilisation and packaging. Chemical, microbiological and sensory analysis are dealt with in a separate chapter.

This book is a good read for anyone interested in the science of beer or its consumption. It ends by looking forward to the possible future for beer. The author does not see much change in the basic processes of beer production, though there may be changes involving genetically modified yeast and further moves from glass to plastic bottles.