On fact and fraud: cautionary tales from the front lines of science

On fact and fraud: cautionary tales from the front lines of science 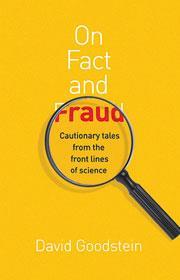 Peer review is not very good at detecting fraud

Goodstein was professor of physics and, from 1988, vice-provost at Caltech in the US. The latter role involved his dealing with alleged cases of scientific misconduct. This led him to run a course on scientific ethics and this book consists of a series of personal reflections on topics covered on this course, focusing on several cases in which he had been personally involved.

Goodstein emphasises that there is no single set of absolute rules for scientific research, and the ’winner takes all the credit’ system encourages a variety of approaches. But the ’anything goes’ approach cannot be acceptable, and scientists who fabricate data must be judged much more harshly than those who merely extrapolate beyond recorded data. Many cases of so-called scientific fraud involve people who believe that they are contributing some truth into the scientific record, but want to avoid going through all the trouble that the real scientific method demands.

Peer review of scientific papers is sometimes considered as a guardian of scientific ethics, but Goodstein points out that, although it is quite good at separating real science from nonsense, it is not good at detecting fraud, as shown by several recent high-profile cases.

Goodstein examines a series of case studies of suspected fraud which demonstrate how complex these matters are, and how difficult it is to decide whether fraud has occurred or not. The first case is that of Robert Millikan, Nobel prize winner and founder of Caltech, who had been accused of fraud. Painstaking investigation of his experimental records resulted in a ’not guilty’ verdict. The second case concerned the biologists Hood and Urban at Caltech who were found to have faked data.

The notorious ’cold fusion’ case is dealt with in considerable detail, with the conclusion reached that it had not been a matter of deliberate fraud, but Fleischmann and Pons had convinced themselves that they had made a huge breakthrough, and were reluctant to abandon their cherished belief, even in the face of repeated failures by others to replicate their results.

This short book, written by an insider, challenges the reader on the nature and ethics of scientific endeavour. It is a reminder that researchers are under ever-increasing pressure to cut corners in order to get results quickly, and there are real temptations to ’fast track’ careers.