This book seeks to show that, despite British chemistry in the period 1880-1949 being principally male preserve, there were 849 known women chemists during that time, many of whom made major contributions to the subject. These women are largely unknown in the historical records - on their death many only received a one-line name and date of death in Chemistry in Britain. This book seeks to put the record straight by showcasing 141 of these remarkable women, emphasising their great determination to succeed and flourish in a world dominated by men and their prejudices. 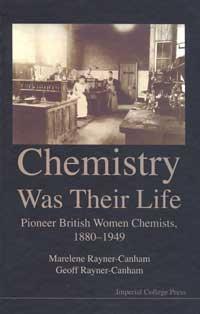 Chemistry was their life  has been very well researched and is extensively referenced. Geoff Rayner-Canham, a British-born professor at the Sir William Grenfell College in Canada, has carried out extensive research on the history of science, particularly the work of women in early modern science; this research was carried out in conjunction with his wife Marelene who has co-authored this book.

It is of great interest also to read of the battle which these women had to obtain recognition by professional societies. The Chemical Society (one of the components of the Royal Society of Chemistry) put up significant barriers to women. In 1904 a petition was presented to Council by Smedley and Whiteley and signed by 19 women chemists, requesting admission to fellowship. This failed by 23 votes to 22 at the AGM (out of 2700 members). Women were not finally admitted as fellows of the Chemical Society until 1920, when 21 were admitted, including Smedley and Whiteley.

It is interesting to note the particular contribution of women to crystallography, partly at least due to the enlightened views of the Braggs and J D Bernal, and to pharmacy. There are chapters covering the role of chemist’s wives, the role of women chemists in the first world war, and their important contributions to the interwar and second world war periods.

The one woman in the book whom I have met personally, and whose work I am acquainted with, is the food chemist and nutritionist Elsie Widdowson, who played an important role in the development of Britain’s wartime food rationing and whose food composition tables are still widely used today. If the others mentioned in the book were anything like Elsie they are certainly worthy of our admiration.

One criticism of the book is the lack of photographs to illustrate the text; I would have liked to have seen images of what some of these women looked like.