The element in the room: science-y stuff staring you in the face 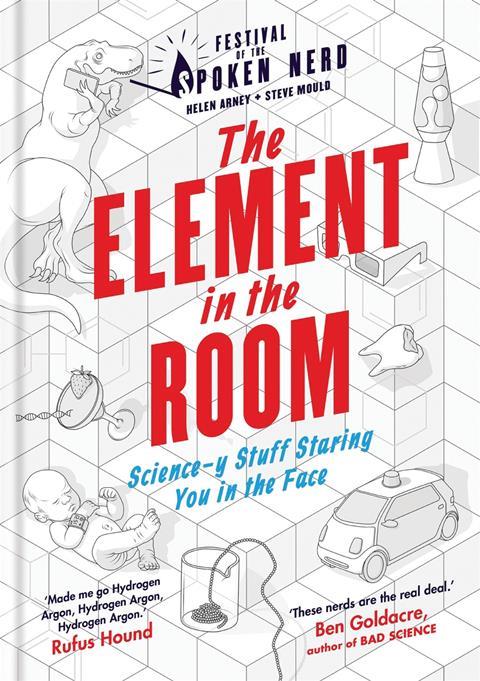 If you’re familiar with the Festival of the spoken nerd then you’ll already know the comedic trio of Helen Arney, Steve Mould and Matt Parker. For those not in the know, this team of intrepid science popularisers has been taking maths and science onto the stage for the last seven years, amusing audiences with some of the weird and wonderful things that the scientific method has uncovered. This book takes elements of the stage show – minus Parker’s contribution as chief maths nerd, who had to bow out owing to other writing commitments – and introduces them as a series of short, standalone stories.

The format of The element in the room follows a well-worn path that you’ll recognise if you’ve read many popular science books. It draws together a huge number of anecdotes, curiosities and hard science, and weaves them into compelling page-long pieces. Each of these is grouped into diverse chapters such as body stuff, chemical elements and the universe. So far, so normal. What was a break from the norm, and something I enjoyed, were stories treating your own body as the lab. In one nice example you can learn if you’re an evolutionary throwback and have retained a vestigial tendon. Apparently, we no longer need this tendon as we spend much less time swinging around in trees but only 15% of the population have lost it.

There is a section that focuses on the elements, but unsurprisingly for a general interest science book, it’s pretty brief. It does take in the cold war shenanigans of the transfermium wars, atomic clocks and mercury’s neurotoxicity – and the tales are well told – but there won’t be much new there for a well-informed reader. My only other minor grumble is that it would have been nice if the book was in colour and had a few more photos to illustrate the stories.

If you’re looking for a book that will go into detail explaining scientific phenomena you’re out of luck. The stories give each topic only a cursory appraisal and quickly move on. But if you’re after an introduction to several different topics in a humorous and accessible manner then this is for you. I challenge anyone to dip into this book and not come away having learnt something new. It is sure to unleash the inner nerd in all but the most curmudgeonly reader.