Promethean ambitions. Alchemy and the quest to perfect nature

Many 19th-century chemists abandoned organic chemistry when they realised that it was becoming the study of ’unnatural’ artificial substances rather than of the compound materials extracted from plants and animals. Others relished the challenge of making and investigating such compounds. In the longer term, the investigation and synthesis of artificial substances enabled chemists to understand better the natural products that had interested earlier chemists. The benefits included new medicines and materials that were more perfect and useful than their natural counterparts. 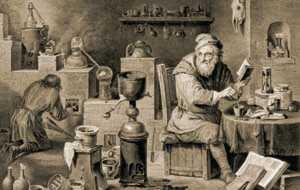 The divide between art and nature lies at the heart of Newman’s brilliant historical analysis of mankind’s drive to build a better world through science and technology. Unlike many historians he is not afraid to show the relevance of his work to contemporary debates over ectogenesis and organotherapy. Religious, ethical and philosophical debates about copying and then perfecting and emulating what God or nature achieves are as old as mankind.

Alchemists were never solely concerned with attempts at making gold, but were practical chemists concerned with transmutation generally. For some the goal was the creation of life itself.

The medieval church and university were stirred by arguments as to whether it was right to assume power over nature, both in the sense of copying what nature did, and in perfecting it. Just like us today the early moderns were concerned with issues such as artificial life, and the identity and safety of natural and synthetic products. Such controversies, Newman shows, were central to the origins of laboratory-based experimental science in the 17th century.

Don’t be put off by the author’s multi-language footnote scholarship. The straightforward text tells fascinating stories about mankind’s Promethean drives. If, like the alchemist, you believe art is the servant of nature, why not try out the instructions given for the alchemical creation of the homunculus?