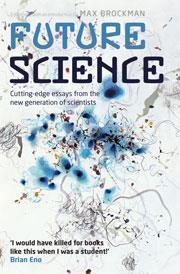 Of the 18 essays in this collection only four are science as we know it. The other 14 are about sociology, psychology, anthropology and ethics. Some of them appear to be based simply on analysing data from the internet. If this is ’cutting edge’ science then it’s very blunt. More importantly, there’s nothing about chemistry. Perhaps we’ve no future worth writing about?

To be fair, some of these essays are about science. The first one considers the possibility of life on Europa, the moon of Jupiter, which might have liquid water beneath its frozen surface. The author, Kevin Hand, points out that we still know little of what goes on in the deepest parts of the Earth’s oceans and that wherever there’s liquid H2O there may be life.

Another science essay is about the immunity system of plants by Kirsten Bomblies and this again is an area where there is clearly still a lot to be learnt. The same applies to proteins, and William McEwan takes us into its domain and tells us about retroviruses and HIV, albeit at a rather technical level.

’Nature, nurture and the stress that is life’ is the title of Daniela Kaufer and Darlene Francis’s essay and it explains how the separation between genetic and environmental influences is not as clear cut as we’ve assumed. The environment really can alter our genes and affect our life, although not in a way we can pass to our descendants.

Sadly, most of Future Science is about things like social networking, personal attractiveness, the meaning of shame, social rejection, how people make choices, decision-making, moral intentions and even about how we decide if something has a mind. No doubt these topics are worth discussing in the right context, but if this is a road map to the future of science then we’re heading in the wrong direction.