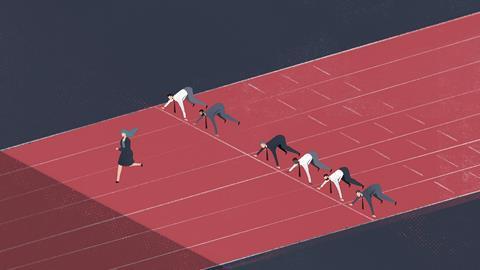 How excluding people can be a mark of inclusion

A woman walks in to a job interview and the leader of the panel says: ‘We don’t believe in gender bias.’ She doesn’t get the job because she’s a woman.

Not much of a punchline, but then it’s no joke. It’s a situation that reflects the conclusion of a recent study: hiring committees with a strong unconscious gender bias, but that do not explicitly think that there are barriers to gender equity, are less likely to hire or promote women. Not a surprising finding perhaps, but it’s good to have the data to back up what feels anecdotally true.

The knock-on effect can be seen in a separate analysis that looked at women employed in 541 stem-cell research institutions in 38 countries over the last four years. This study suggests that women are systematically underrepresented in senior roles – in one-third of institutions, just 10% of the tenured faculty recruited during the study were women.

To redress the gender balance, institutions are starting to advertise fellowships and jobs that are open to women only. I have mixed feelings about this. On the plus side, it acknowledges that there is a gender diversity problem, and that this problem is so ingrained into our current hiring system that we have to resort to drastic measures to correct it.

And if we have to take bold steps like restricting job searches to one gender in order to achieve equity, we must be open about doing it. While it might be frustrating to be prevented from applying for a position, spending time on an application when you secretly had no chance of getting the job is even more annoying. (Just ask anyone who’s ever competed against a preferred internal candidate.)

My concern is that by restricting jobs to one underrepresented group, we privilege that group above others who are equally in need of extra support. Using restricted jobs to boost the numbers of women hired also partially relieves a department of the pressure to investigate sources of bias and cultural problems that might make women less likely to apply in the first place – though I would hope no-one would be so unscrupulous as to take advantage of that opportunity.

First and foremost, an environment where people are welcomed regardless of their background or biology must be in place to back up any targeted recruitment campaign. And indeed, if an institution is willing to risk the backlash that can accompany a gender-restricted job advert, that would seem to indicate that it cares a lot about inclusion. A department that openly limits one or two positions to applications from underrepresented groups is likely to be a department that is open to everyone.