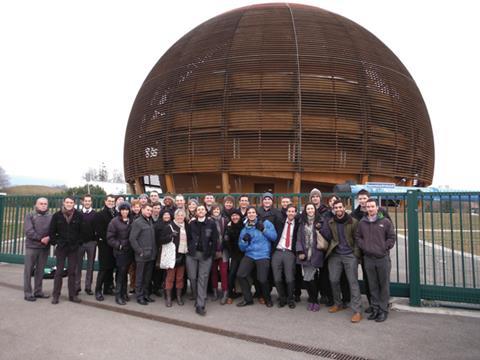 The Nuclear Graduates programme was set up in 2008 by the UK Nuclear Decommissioning Authority (NDA) in response to a growing skills gap in the nuclear industry. Recruitment had been low for some time, and skilled young people were needed to counterbalance an ageing population, explains Anna Byrne, the scheme’s recruitment and selection lead.

‘NDA initially funded 30 graduates through the programme, and now they are sponsored by companies across the industry,’ she says. ‘We expect to recruit 50 graduates this year, about 20% of whom will be chemists.’ Applicants are matched with potential sponsors depending on their skills and areas of interest, and invited to a two-day assessment centre where they meet – and are assessed by – the sponsoring companies. Roles range from technical to commercial, and most graduates return to a permanent job at their sponsor after the two years.

The programme involves three eight-month secondments at different companies, starting with their sponsor, giving them a broad exposure to the industry. The graduates also come together to complete training modules on technical aspects of nuclear technology, and to learn softer skills such as project management and commercial awareness. ‘They choose which they want to complete,’ Byrne says. ‘It’s very bespoke.’

Many of the chemists recruited work on decommissioning, in companies such as Magnox and Sellafield. Magnox, for example, is looking for practical and enthusiastic graduates, according to strategic programme resource manager Jill Gardner. ‘While in the past R&D was a key part of Magnox’s activities, now we focus on decommissioning issues that are often first-of-a-kind applications,’ she says. ‘Graduates find it interesting and exciting, and there is also an important project management element – developing technical solutions within budget.’

Gardner says Magnox has recruited some very good graduates via the scheme. She attends the assessment centre, and says it not only lets companies see whether the candidates are right for them, but the candidates also learn whether the industry is a good fit for their aspirations.

University of Cambridge chemistry graduate Ben Goodwill completed the scheme in 2013, and is now employed in a commercial role by his sponsor, International Nuclear Services (INS). ‘The scheme attracted me because I could try a lot of different areas to find out what I enjoy,’ he says. ‘The technical aspects appealed to me, but also the business and commercial challenges.’

INS specialises in shipping nuclear materials around the world. Goodwill’s first placement was in the transport section, working on shipments going overseas. ‘I even managed to get a voyage on one of the ships,’ he says. His second placement was at EDF Energy, assessing how spent fuel flasks were handled at its seven advanced gas-cooled reactors in the UK. Finally, he returned to INS and its commercial department, shipping uranium from the UK to an overseas customer. ‘Although chemistry wasn’t the focus of that project, it was useful in understanding the analytical constraints and how the material behaves,’ he says.

Goodwill is extremely pleased he applied for the programme. ‘It provides a wide variety of knowledge, so when you go into industry you have an understanding of everything from new reactor builds to decommissioning, as well as radiological safety,’ he says. ‘It gave me the opportunity to work in a very interesting industry, and experience different aspects of it.’

Annie Jacobs, an Oxford chemistry graduate, is just coming to the end of her two years on the scheme. ‘I hadn’t really thought about the nuclear industry and wasn’t sure what I wanted to do, but it sounded interesting, as did the opportunity to gain broad experience,’ she says. ‘The application process was very thorough, and the assessment centre very intense.’

Her sponsor is Sellafield, and she spent her first eight months working at the reactor in Cumbria, which is being decommissioned. Next, she worked in a non-technical role at consultancy DBD, on marketing and business development. Her final, technical, placement is at Magnox.

‘When I start my full-time job at Sellafield, I will be working in an operational support role, looking at problems that crop up, and making sure the plant meets all its safety requirements,’ she says. ‘The nuclear industry is in a really exciting time … I’m glad I applied. The view of the industry [the scheme] gives shows the range of opportunities that lie ahead.