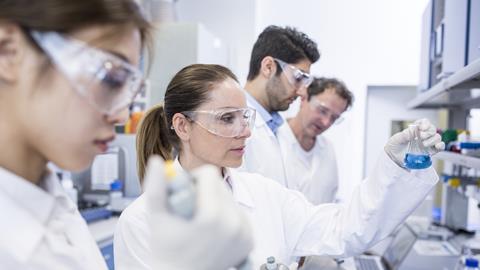 How SMEs are bridging the gap between undergraduates and industry

The first undergraduate student that undertook a year-long industrial placement at Surrey NanoSystems created a material that was used at the winter Olympic games. To say the placement was a success might be an understatement. ‘It was a fantastic result,’ says Ben Jensen, chief technology officer and founder of the company.

The experience seemed to be positive all round. Taking on a placement student opened up the company to a fresh way of thinking. ‘They very often think of a 100 different ways to try and solve a problem and that’s really something to see,’ says Jensen. And the students had the chance to work on real-world problems, gaining a wealth of experience during the year. ‘It’s great to see people come in with very little understanding of what we do and of industrial chemistry and see how they grow. We’ve had a really, really great experience.’

Today industrial placements appear to be more valued than ever. Universities want to encourage them, students want to do them and employees want to recruit graduates who have completed them. ‘There’s evidence that says if you’ve done a placement your salary is higher, your job satisfaction is higher and your employability goes up,’ says Lee Higham, the academic lead for employability and enterprise at Newcastle University. ‘The change in students is remarkable,’ he adds. ‘They’re much more independent, their time management is much improved, they can work in a team.’

But while demand for industrial placements is increasing, the number of places offered is struggling to keep up. Every year more undergraduates apply for places than placements available. ‘One company said they had 600 applications for two placements,’ says Higham. With all this relatively cheap resource available why aren’t more companies jumping at the chance to take on industrial students?

Surrey NanoSystems first hosted a placement student two years ago. It was funded by a now-cancelled scheme from the Royal Society of Chemistry that offered funding to support the placement costs at the SME. A second placement followed the year afterwards, half-funded by the RSC.

Although the experience was overwhelmingly positive, it did not come without effort. ‘You have to pick your student very wisely. People have to generally be self-starters,’ says Jensen. Students on placements are usually supported by experienced members of staff. ‘You have to have enough bandwidth to able to do that and to provide the right level of support. You get something back but also have to support the student to make sure they’re not just doing work for you, they’re doing something for their career. So it’s definitely a two-way street.’

It is a problem that is not just faced by SMEs. Mark Nisbet is R&D innovation lead for oral and skin health at GSK Consumer Healthcare. They have been running a placement scheme at the Weybridge site in Surrey, UK, for the past three years, and currently have 24 placement students in their teams. ‘As their first experience in the workplace, they can be raw when they come in, so the onus is on us to provide the right training to bring them up to speed,’ says Nisbet. His site employs a buddy scheme for every student, which can take up a significant portion of the more experienced chemists’ time. At Weybridge, GSK also have a placement coordinator – an additional responsibility for an employee who carries out these duties alongside her regular role.

Despite the resource needed, the ‘return is tremendous’ says Nisbet. Most scientists at Weybridge are fairly experienced, as the site doesn’t have a graduate recruitment scheme, so the students are very different to the existing scientist population. ‘It’s great to have new blood in the team. They don’t just bring their lab skills but a whole attitude as well.’

The students have been so well received since the programme started that there is now more demand for them then there is space on site. But budgeting for such a programme is still a consideration. ‘There is an assumption in a big organisation that cost is not so much of a barrier but we still have to justify it,’ says Nisbet. Recruiting, training and supporting students all take effort. ‘But we feel it’s justified. It’s something we like doing and is important to us.’

Unfortunately it’s not a position all companies find themselves in. John Porter is group leader for chemistry at Midatech Pharma, an SME that focuses on drug delivery. Midatech Pharma have hosted three placement students to date, two funded by the RSC scheme. Like Surrey NanoSystems and GSK, they saw great benefits from hosting students. However, now the RSC scheme has closed Midatech Pharma do not have the money or resources to continue the placement scheme themselves. ‘It’s not lack of desire to have students working here it’s just the financial situation that makes it extremely difficult for us,’ says Porter. ‘For biotech companies [such as Midatech] the key focus is to get something into the clinic and onto the market as quickly as possible. There isn’t a vast pot of money around that we can distribute to fund students.’ In tough financial times, student placements fall to the bottom of the list. Both Porter and Jensen would like to see more funding available to help SMEs in this position.

As the chemical industry has become more fragmented, fewer placements are being offered to students by big pharma. It is increasingly looking like SMEs – such as Midatech Pharma and Surrey NanoSystems – will be the ones needed to provide placements in the future.

However, the shift in focus towards SMEs poses a problem for higher education. ‘SMEs are a constantly changing landscape and trying to keep up with that is difficult,’ says Paul Duckmanton, the placement coordinator at the University of Southampton, UK. ‘Having an easily accessible list of SMEs would be a dream.’ Unlike big pharmaceutical companies, which often have well-established schemes, SMEs might instead decide on a yearly basis whether they are able to take on a student or not. ‘This means the continuation of relationship isn’t always there,’ says Duckmanton.

For SMEs, developing closer relationships with their local university can offer much-needed support. For example, ensuring a placement is providing suitable work for a student can take time and consideration for an industrial host. So-called ‘sandwich’ and summer placements don’t typically count towards a student’s degree work, but year-long placements in four-year research courses need to involve research that is suitable for an accredited degree. ‘There’s a difference between an MChem placement and a routine placement,’ says Brian Grievson a senior lecturer and placement coordinator at the University of York, UK. Sandwich placements, for example, can include marketing or quality assurance roles. ‘That’s fine but it’s not research and development – the placement has to be in chemistry,” says Grievson.

‘The biggest barrier that we have as a university are the industry’s confidentiality requirements,’ adds Duckmanton. ‘Companies quite rightly want to protect their intellectual property.’ But this is something that university coordinator can help with – working to ensure placements being offered are able to be assessed by university tutors. ‘Increasingly, we are dealing with SMEs and can take some of the hassle away,’ says Grievson. He works with companies to ensure they are offering placements that are suitable for their students and can also help to iron out any confidentiality issues. He can also help with recruitment by advertising to students or even by hosting interviews at the university.

For Jensen at Surrey NanoSystems, the positives of running student placements are worth the perceived difficulties of setting them up. But he says this might not be so obvious to an SME that has never taken on a student before. ‘The issue I see for a lot of SMEs is they’re scared of doing it because they have to provide internal support and most of them are already quite stretched anyway,’ says Jensen. Another barrier, he says, is the potential risk of having to pay a student salary for a year without knowing what they will be delivered in that time.

SMEs can test the waters first through shorter placements that require less resource and money. Newcastle University, for example, offers a system where it will half fund a summer internship in industry. ‘It is really attractive to these kinds of small companies,’ explains Higham, as it gives them a chance to show that this model works and develop a relationship with the university before offering a full industrial placement.

Higham sees industrial placements as a cog in a wider wheel of industrial engagements, which can all offer students valuable career development experiences. He encourages students and universities to be open minded about other opportunities that are available. For example a study abroad programme can offer students many of the same developmental opportunities including a chance to be independent, work in a team, and have something different on your CV.

Exploring more flexible placement models could also help ease the situation and open it up for more companies to take part. The University of Southampton offers two accredited MChem degrees with industrial placements – one with a year-long placement, but the other with a six-month placement. The latter option is populated almost universally by SMEs who appreciate the flexibility, and often move between offering placements on the year-long and six-month programme depending on their business needs. ‘In the UK, there is this view that an industrial placement is primarily a year’s placement and that’s partly degree structure,’ says Duckmanton. He believes more flexibility would be a good thing from a company’s perspective, but cautions that there would need to be limitations to this. For example offering a three month placement between December and March would not work well, but having a floating start date would. ‘That flexibility needs to fit around that placement schemes in the university.’

With the demand for placement showing no signs of slowing down, something in the current model needs to change – whether that be additional funding, more flexible models or better communication between academia and industry. Graduates with industrial placements are often bumped to the top of the pile when applying for jobs. But if companies aren’t offering students positions themselves, how can they expect those applying to have such experience on their CVs?

‘We have an obligation to extend the training of our students beyond university to the workplace,’ says Porter. ‘To provide them with the experience and background to potentially become scientists of the future.’