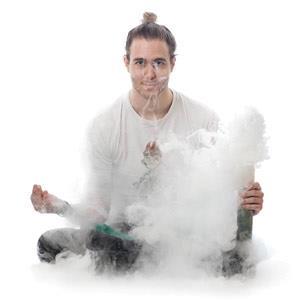 ‘When you start a company from scratch at 22, nobody takes you seriously,’ says Marc Wilemen

Marc Wileman has set himself a goal to ‘make science awesome for one million kids’. So far, over 440,000 children have watched a science show or been to a party run by a team from Wileman’s company, Sublime Science. ‘The goal doesn’t seem so ridiculous any more,’ he says.

Otherwise known as ‘Mad Marc’, Wileman set up Sublime Science in 2008, aged just 22. He had spent the previous year touring Australia with science communication company Fizzics Education. ‘It is a really awesome organisation. We drove around in a pick-up truck doing science for people in rural areas,’ he recalls.

Returning to England, Wileman decided to go it alone with a one-man show, presenting children aged of four to 11 years with a raft of science favourites – from cornflour slime to bubbles and bicarbonate volcanoes. Initially, the company had little backing beyond a £1750 loan from the Prince’s Trust and Wileman’s credit card limit; he says most of his friends just laughed when he told them of his plans. ‘When you start a company from scratch when you are 22, no one takes you seriously. People thought it was hilarious.’ In 2016, Wileman predicts his company will have a £1 million turnover. People aren’t laughing any more.

The business had a fairly slow start, relying on word of mouth for expansion. Yet after only one year, Wileman was able to start hiring people. He now has 134 employees, many of whom are studying for a masters degree, PhD or postgraduate certificate in education. ‘It’s really important to get experience working with kids but it’s hard to get. We have helped a lot of people going into teaching,’ he says.

In August 2015, Wileman decided to seek investment by appearing on the BBC TV show Dragons’ den. The entrepreneur ‘dragons’ were astonished by Wileman’s company growth. When he revealed Sublime Science had turned over £533,000 in 2014, with a net profit of £177,000, Jessops owner Peter Jones was uncharacteristically congratulatory: ‘Wow. I have to say I’m incredibly impressed … I’m shocked.’

Wileman eventually received offers from four of the dragons, choosing to work with Moonpig.com founder Nick Jenkins and former owner of The Bombay Bicycle Club Sarah Willingham, who invested a combined £50,000 in return for a 10% share in the business.

The secret to Wileman’s success is his infectious enthusiasm. ‘I have always enjoyed coming up with different ways of explaining things,’ he says. As a child, he first got the science bug when reading Roald Dahl’s George’s marvellous medicine. He attempted his own experiments with random ingredients and became fascinated by how the universe formed. He went on to gain a first class masters degree in physics from the University of Nottingham, with a year spent in Toronto, Canada.

He is very grateful to his ‘super encouraging’ parents. ‘They genuinely would not have cared what I wanted to do. As long as I was doing the best I could, they were always encouraging.’ 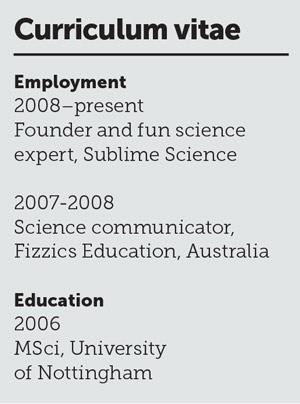 Wileman now advises children to concentrate on what interests them. ‘I always say: just focus on what you find most fascinating and try to get really good at it. Whether it’s science or sport or art, it will be useful.’

All kids have a natural curiosity, yet as a society we have a tendency to stifle it, he adds. ‘Curiosity naturally leads you into science. That curiosity is science.’ Wileman strongly believes that teaching kids how to think in a ‘creative, structured’ way is the best way to prepare them for adult life. Many of the skills taught in school – bar literacy and numeracy – become ‘obsolete’ by the time of graduation and work, he suggests.

Today, Wileman says he is ‘ridiculously busy’, happily working 80–100 hour weeks with little time for anything else, including holidays. ‘Sublime Science has massively surpassed anything I would have thought possible.’ As the business expands, he is keen to maintain the quality of its education, and focus on its core mission of getting children interested in science; the company has given away 70,000 copies of his book, Don’t eat your slime – incredible experiments for curious kids, as well as vast numbers of experiment sheets.

Wileman’s hope is to one day receive an email saying that he has inspired someone to study science at university. ‘That,’ he says, ‘would be pretty cool.’