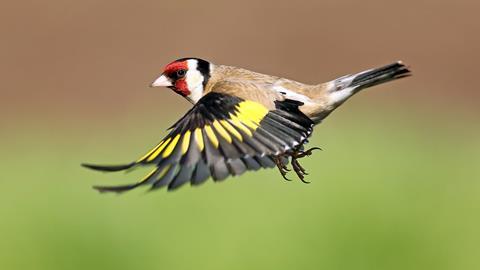 Iodabenzene, a molecule that has only existed in chemists’ imagination so far, might be realised experimentally as a bird-shaped structure.

The peculiar compound, a benzene ring in which one of the C–H groups is replaced with an iodine atom, was first proposed in 1991. However, the compound’s eight π electrons make it anti-aromatic and highly unstable – nobody has been able to synthesise it yet.

The ‘bird’ shaped conformation that might allow iodabenzene to take flight

Now, a team that includes molecular dynamics researcher Abdel Monem Rawashdeh from Yarmouk University, Jordan, and theoretical chemist and chemistry Nobel prize winner Roald Hoffmann from Cornell University, US, have used computational analysis to find out how to potentially stabilise iodabenzene. They calculated the relative energy levels of various structural isomers and found the most stable to be the bird geometry: four of the carbon atoms form a plane, their hydrogen substituents bent upwards in a wing-like fashion, while the iodine ‘beak’ and the one-carbon ‘tail’ sit below this plane.

The researchers noted the bird structure’s similarity to a Meisenheimer complex, a reactive intermediate of nucleophilic aromatic substitution, which can be stabilised if π electron-accepting functional groups are placed at certain positions around the ring. Rawashdeh and Hoffmann suggest that the same strategy could help making the hypothetical iodabenzene an experimental reality.