3
On board the apprenticeship 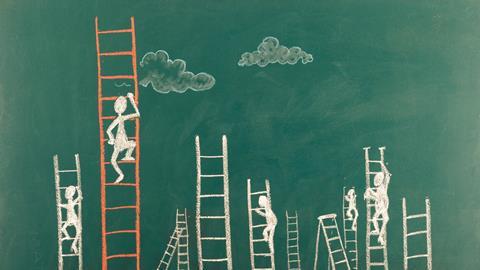 On board the apprenticeship

Going to university straight from school seems like the only path for a successful career – particularly in science – but this isn’t true for a new cohort of science apprentices like Madison Sturgess. Sturgess is about to complete her level 3 apprenticeship as a trainee scientist at Reading Scientific Services Limited (RSSL) and is convinced she will be able to develop a flourishing career in chemistry. Many of her graduate colleagues now wish they had also taken this route. ‘They actually found it quite difficult to get jobs after their degree, so I think I’ve definitely made the right choice and have been able to get all of this actual real-life experience,’ she says.

The reappraisal of the UK’s apprenticeship training started with the government-commissioned Sainsbury report on technical education in 2016, which found that the difficulties filling technical roles experienced by UK industries were being exacerbated by a system that pushes students towards a university-based academic education. Those who did not go to university were abandoning Stem careers altogether. The solution proposed was to create two distinct post-16 career pathways: an ‘academic’ one and a ‘technical’ one based on apprenticeships that would allow school-leavers to work in an array of Stem (science, technology, engineering and maths) roles while studying at the same time.

The training models vary nationally in the UK, but include a two-year basic lab technician apprenticeship (level 3 in England) and a laboratory scientist apprenticeship (level 6) that takes an extra three years and provides the apprentice with a chemistry or life sciences degree, in addition to their vocational qualification. In Scotland a ‘modern apprenticeship’ often includes working towards an HND in applied science (equivalent to university foundation level).

Shane Averyard is an assistant scientist and a level 6 apprentice at the Environment Agency in Leeds. He started his first lab technician apprenticeship straight from school out of ‘desperation’, he jokes. ‘After I finished my A-levels, I knew I didn’t want to go to university, but just I wanted to start working and making money … apprenticeships were the most realistic way to get started in an actual career. I didn’t want to go and work in Sainsbury’s, I wanted to try and find something that I can do throughout my life.’ He initially thought about becoming a mechanic, but saw the laboratory apprenticeship first and applied. After completing this and moving to his current role, he realised he would need a further qualification for career progression so began his level 6 apprenticeship and part-time degree.

Sturgess went to an academic school where ‘there wasn’t a huge amount of talk about apprenticeships’, but she found out about the opportunities available during work experience at RSSL. ‘I knew that this was the kind of work I wanted to do,’ she says. ‘It meant that I got that practical experience, which unfortunately I was not going to be able to get as much of by attending university [during the pandemic].’ She is moving on to her level 6 apprenticeship in the next academic year and will continue to attend the University of Greenwich one day a week, where she will join both full-time and part-time students studying for a chemistry degree.

Apprentices are also assessed on their technical competences. ‘We will go through what’s called the endpoint assessment,’ explains Sturgess. ‘There will be an interview discussion, to assess our knowledge of the different skills and behaviours that we’ve accrued across the apprenticeship. There’ll be a knowledge test, looking at things such as health and safety, and also a member of the awarding board [will come] into RSSL to actually shadow us in our work and ask us questions about what it is we’re doing and why.’

Averyard says he can see the benefits of both a traditional university pathway and the apprenticeship track he has chosen. ‘I don’t think one way is better than the other. If I’m honest, I’ve met people that went to university … and the experience they had at university was absolutely amazing and that’s something that I never got, and I will never have … but at the same time, I was working and growing as an adult earlier than them.’

Derek Steven, who runs chemical science apprenticeship programmes at New College Lanarkshire, also sees the value of an apprenticeship for many of his students. ‘They get the best of both worlds – they get employment, they get salaries, but they’re gaining all these practical skills.’ For students that are not aiming for university, often with no family history of university study, an apprenticeship gives them an opportunity for a local job and a qualification. But increasingly he encounters those who make a strategic decision to take this path, to become more employable. ‘They felt that they wanted a smaller class size in college, they wanted to gain the practical experience, they were very clued up,’ says Steven.

There are still issues with the take up of Stem apprenticeships, however. In 2017 the government introduced the apprenticeship levy in England, which compels employers with a wage bill of over £3 million to set aside 0.5% of the bill to fund apprenticeship training – on a use it (within 24 months) or lose it basis. But according to data from the Science Industry Partnership (SIP), only 3150 new science apprentices started in 2019, compared with 5200 in 2016.

In Scotland, Stevens also sees a lack of student interest in apprenticeships in science and a lack of companies offering opportunities, which is a contrast to what he sees in engineering fields. ‘Apprentices in engineering are embedded within the sector, [and are] very highly used and sought after … young people, parents and influencers really see it as something that people should go for.’ He says more recently he has seen a slight shift in the attitude of science-based companies, ‘particularly maybe the smaller companies … they see the value in growing your own and getting them into the organisation early in their career.’

Outside the UK, there are also concerns about vocational Stem training. Germany is well known for its strong apprenticeship training, but even here there are fears that the workforce of well-trained Stem technicians is shrinking. Thomas Letzel, a lecturer in analytical chemistry at the Technical University of Munich, started as an apprentice himself. He now chairs the German Chemical Society’s working group on vocational education, which has been examining some of the problems.

The German system provided separate routes for academic and technical training, but this has started to break down as Germany sought to integrate education with the rest of Europe. ‘At that time in 2000, industry in Germany called for more bachelor [degrees and more academically] educated persons,’ says Letzel. As well as different types of university, some technical, some academic, school leavers could choose apprenticeships, known as ‘the dual system’. This gave them a high level of practical science skills training while being employed in a company.

Now Letzel fears that some of the changes in Germany are leading the country away from its strong technical training, and the system is becoming too focused on academic studies, mirroring some of the problems in the UK. ‘Academisation is on the one hand okay, but you also need well educated and practical persons,’ says Letzel. ‘We have a bouquet of different profiles in chemistry and at the moment we are moving more and more to a monoculture [in education]. And this is a little bit of a pity.’

Companies in the UK who have embraced the introduction of Stem apprenticeships are seeing really positive impacts on their organisations. AstraZeneca employs over 250 apprentices across its business and have found positions easy to fill with eager and talented candidates. ‘Our apprenticeship numbers are increasing year on year. Last year, we took on 43 and this year, 56, in completely different areas, although our science apprenticeships are one of the staples,’ says Kim Hardman, AstraZeneca’s director of UK apprenticeships, who is based in Stockport, UK.

The majority are recruited straight from A-levels but only where there is a strategic need in the business that provides a permanent job. Hardman says apprentices help to create a more diverse workforce: ‘they give us a fresh perspective and it’s a different perspective to graduates’. AstraZeneca is also making use of the master’s level apprenticeship qualification and offering graduates an opportunity to add an additional speciality to their skillset. ‘There’s no age limit on apprenticeship,’ adds Hardman.

There are so many different routes to a top level career

This seems to be an attempt to make sure an apprentice is only studying subjects directly relevant to their job, but could mean companies having to pay extra to provide their apprentices with degree-level tuition. Hardman and others are concerned it will make apprenticeships less attractive. ‘We wouldn’t use it without the qualification,’ she says. ‘We’re a global organisation, we need individuals who are going to get the same biology or chemistry degree that a graduate would get, so that once they’re finished, there’s no foot on their head, [or] ceiling [to career progression] for them.’ The possible changes are all the more frustrating as Hardman says champions for apprentices, such as herself, have now convinced their senior colleagues of the added value apprentices bring.

The new apprentices themselves are also finding their footing within their companies. Comparing their progress with the graduate recruits they work alongside, ‘there’s always going to be a difference’, says Averyard. ‘The chances are they’re going to know the deeper theoretical stuff that I wouldn’t have known, but because I’ve worked here much longer I’ll know more operational things.’

He knows he will need to complete his degree to open the doors to higher pay grades, but can already see his progress in the two years of his degree apprenticeship. ‘I would have had a basic understanding of chemistry before and I had learned things through my work experience, but in that two years, I’ve definitely learned more theoretical stuff than in my whole working life.’ Averyard reflects that there may still be stigma attached to those who chose an apprenticeship route and a sense from some that apprentices don’t deserve better paid jobs. ‘All I can say is, if you’re good at what you do, you’ll get paid what you’re worth.’

For those attracted to the apprentice route Sturgess advises going to careers fairs and speaking to companies. ‘I would certainly recommend having all of those conversations, and trying to see what potential routes are out there rather than just university, because there are so many different routes to a top level career.’

Editor’s note: This article was updated on 16 August to correct the qualification Madison Sturgess is working towards. She is about to complete a level 3 apprenticeship.