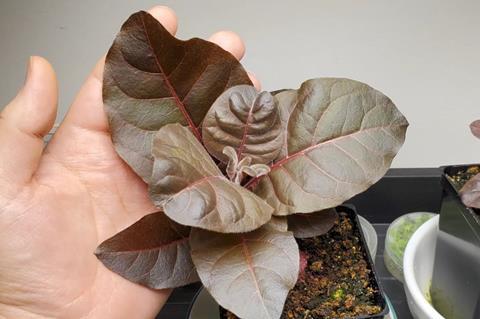 Sebastian Cocioba sees himself as a molecular florist, genetically modifying plants in his home lab to create weird and wonderful aesthetics, including striking new features such as fluorescence. He is passionate about sharing tools and data to create a community of like-minded individuals.

‘One of my goals is to accumulate a filing cabinet of amateur biologists doing really interesting projects that are well-intentioned, well-considered and respected by professional academics,’ he says.

Cocioba decided to go it alone as an ‘amateur’ after a ‘series of unfortunate events’ meant he was unable to finish his biology degree at Stony Brook University, US. He makes his results and research tools publicly available and is steadily building a network of like-minded individuals.

He defines amateurs as hard-working enthusiasts who are not linked to an institution. Although fields such as astronomy and chemistry have a long history of amateur research, modern biotechnology has an ‘air of gatekeeping exclusion’ because of fears that self-replicating organisms may harbour a threat, he says.

He works exclusively within United States biosafety level one criteria, which rule out anything that can cause disease in humans but allow almost all plant biology research. ‘I work with things where I am a bigger threat to my organisms than my organisms are to me,’ he says. However, if he were to run a similar ‘biotech cottage industry’ in Europe, regulations would see him ‘hit jail time’, he adds.

Through his consultancy New York Botanics, Cocioba has just begun a major project for a plant synthetic biology company to create houseplants ‘with a twist’, although it is still under wraps.

For another project he collaborated with Stanford University to build a ‘directed evolution’ machine, which uses a ‘poison and antidote system’ to push microbes to evolve rapidly to improve the ability of a protein to perform a specific function.

Cocioba initially followed a Boston University blueprint for a more complex version of the machine but then a global microchip shortage hit. He came up with a ‘ridiculous idea’ to create his own version of the machine. Two months later he had a cheap working prototype, built using parts from mainstream suppliers. He has made the device ‘entirely open source’, together with tutorial videos.

‘The whole idea is to make an ecosystem where people contribute parts and then they build upon it. Engineers far better than myself can contribute meaningfully to it while students can make their own modules. It’s a way for everybody to be able to do directed evolution,’ he says.

Science for all ages

Together with his friend Sung won Lim, Cocioba also runs a not-for-profit called Binomica Labs, an ‘educational research group’ with a mission to provide open-source scientific research tools to ‘discovery-driven researchers of all ages’. Their main focus was on doing research as independent scientists and they needed an institution to work in. ‘We said: why don’t we flip this? Why don’t we become an institution for other amateur biologists to be able to publish through?’ he recalls.

They would like Binomica to be able to provide digital object identifiers (DOIs) for amateur scientists’ research papers. They also hope to set up a large group of established researchers to peer-review manuscripts, which could be submitted by ‘a 12-year-old, a retired plumber or a stay-at-home parent’, he says. ‘What’s important is that they apply scientific rigour and they communicate their work in a manner that’s archivable and reproducible.’

In the meantime, he is looking into obtaining a PhD by publication, which would open more doors and help him to obtain grants. If he does go down the PhD route, it would ‘mostly be just to placate the strange capitalist system that we have,’ he says. ‘Even though in computer science you can be self-taught and get six figures doing programming for Google, there’s no equivalent for biology.’

The Covid-19 pandemic and home schooling caused a boom in sales of molecular biology kits. Cocioba set up a page on a popular online marketplace to sell small circular DNA molecules called plasmids for $20 (£18) a piece.

With the ‘handmade’ plasmids a big hit, he is now setting up his own online store to sell them, together with open-source hardware. As well as providing a passive income, it is also a ‘way to indirectly ensure that if my house catches fire, somebody has my plasmids – a carbon copy of my life,’ he says.

Many of the people buying his plasmids are educators who use them as demonstration tools within their curriculum. On a weekly basis, students contact him asking for advice on how to begin their own research. His advice is always to ‘build your lab around a question’. Instead of randomly procuring items, just get the tools necessary to answer your first question, he says.

‘The beauty of amateur biology is that there’s no timeline.’