Neil Garg plans to transform how students around the world think about organic chemistry – with Bacon. Nina Notman explains

Neil Garg is armed with music videos, shots of tequila and clips from hit shows such as The Big Bang theory and Breaking bad. With them, he is set on transforming the negative perceptions many students have of organic chemistry. 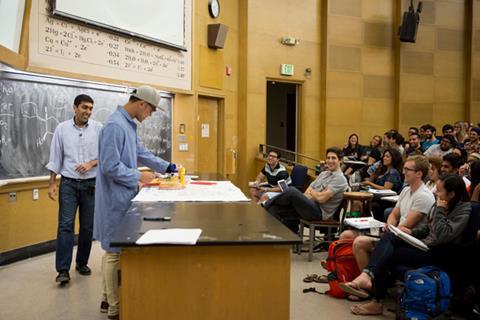 His innovative teaching methods, such as his online notes (Bacon tutorials), have won Garg (far left) a plethora of awards

Since 2007, Garg has been a researcher at the University of California, Los Angeles (UCLA), US, where he spends much of this time thinking about the challenges of organic synthesis. He is also making a name for himself as a supporter of innovative organic chemistry education. Garg has won a plethora of awards for his teaching approaches, including an American Chemical Society Arthur C Cope Scholars Award, a UCLA Gold Shield Faculty Prize, and has been named California professor of the year by the Carnegie Foundation for the Advancement of Teaching. ‘I think it’s a catastrophe that so many students start an organic chemistry course thinking it’s going to be the worst and hardest course of their lives,’ says Garg. ‘A lot of students come out of these courses feeling the same way.’

For Garg, improving the reputation of organic chemistry courses does not mean making them any easier, but instead busting the myths that they are all about memorisation and are not relevant to modern life. ‘I want students to appreciate that organic chemistry is really about problem solving, and that it’s incredibly relevant,’ he says.

Since 2010, the 350 students that take his undergraduate course each year have been making music videos with lyrics about organic chemistry. They are graded both on the quality of the video and the accuracy of the chemistry that has been incorporated, he explains.

Furthermore, in 2014, Garg and his student Tejas Shah designed a series of online tutorials to help the same set of first-year students connect organic chemistry to topics in human health and pop culture. These ‘Biology and chemistry: online notes’ (Bacon) tutorials are designed as lecture follow-up material. ‘The Bacon tutorials start off with a little bit of a recap to remind students of the fundamentals, and the rest of it is helping them see how what they’ve learned is connected to medicine, different aspects of real life and various connections to pop culture,’ explains Garg. ‘TV shows like The Big Bang theory and Breaking bad really make it very easy.’

Following the success of these tutorials at UCLA, Garg decided to think bigger by making the Bacon tutorials accessible to all organic chemistry educators worldwide. To help with this, he turned to crowdfunding to raise awareness of the project in addition to the necessary funds.

A social media campaign earlier this year reached over 1.3 million people, with celebrities including actress Danica McKellar and basketball star Bill Walton tweeting about the project. Over $15,000 (£9800) was raised from over 1000 donors, including former students, distinguished organic chemistry academics, industrial chemists and pharmaceutical companies. The project will go live in early 2016.

Back in the lab

Meanwhile, Garg continues to oversee the work of his research group, which usually has around 15 PhD students and up to two postdocs. ‘Our primary goal is to address difficult synthetic challenges in efficient ways,’ he explains. The emphasis is on developing new ways of synthesising complex molecules with practical value. ‘In some cases we’re activating bonds that are typically considered inert – such as the C–O bonds in esters and C–N bonds in amides – using nickel catalysis, and in other cases we’re taking advantage of very highly reactive intermediates, such as arynes and other cyclic alkynes.’ 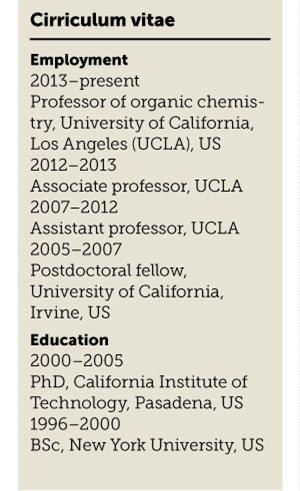 Garg has also synthesised many natural products; his group has had some big scoops so far including ?N-methylwelwitindolinone C isothiocyanate and four other previously elusive welwitindolinone alkaloids, for which Garg published his synthetic approach in 2011. His group has also synthesised the akuammiline alkaloids (±)-aspidophylline A and picrinine, along with the diterpenoid tubingensin A and a variety of indolactam alkaloids.

He credits his professors Yorke Rhodes and Marc Walters for opening his eyes to the joys of organic chemistry during an undergraduate degree at New York University (NYU), US. A presentation by ex-NYU graduate Phil Baran fired that interest, and led Garg to a PhD studentship in natural product synthesis with Brian Stoltz at the California Institute of Technology in Pasadena, US. After completing his PhD in 2005, Garg moved to University of California, Irvine, for a two year postdoc with Larry Overman. Then in 2007, he relocated to UCLA to start his independent research career, and in 2013 he was promoted to full professor.

In addition to teaching and research, Garg is part of a ‘faculty-in-residence’ initiative that means he, his wife and their two young daughters live in a student dorm on the UCLA campus. This role involves supporting students with their studies and through casual interactions. ‘It’s a win–win,’ he explains. ‘Students get to see that faculty are normal people and I am also constantly reminded that students are young people that are still figuring out a lot of things on the personal side.

‘Also, I get to walk across a beautiful campus in Southern California to work every day.’